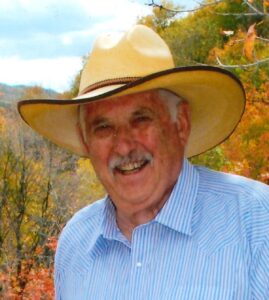 Russ Reeder, 86, our husband and sweetheart, dad, grandpa, great grandpa and great friend, rode off into the sunset on December 6, 2021, after fighting the good fight of old age. Russ was born May 20, 1935, in Logan, UT to Stanley Martin and Phebe Daines Reeder. He had an older sister, Joyce. His dad suddenly passed away when Russ was only 21 months old. He was fortunate to have an uncle, Harold Daines, who took him under his wing and taught him how to grow up to be a man while being raised in a household of women. He also shared his love of horses with Russ which made a big impact on his life. Even with all of Uncle Harold’s guidance and help, Russ still managed to get into a lot of mischief and fun as a young boy.

Russ graduated from North Cache High School where he was involved in student affairs and sports. He loved his high school days and many friends. He also attended USU later in life.

Russ married Ruth Allen on February 24, 1955, in the Logan LDS Temple. They spent 55 years living in his hometown, Hyde Park. In 2010 they moved into a home their son built for them in Logan and have enjoyed having great friends and neighbors there.

Russ was employed in the meat industry for many years, working for Lower Pack, Tri- Miller, and E.A. Miller. He was later hired by Bridgerland Technical College to start a Meat Services Training Program. He worked hard to develop a curriculum that would satisfy the local industry needs, and then began his teaching career. While at BTECH, he also developed and taught a leadership training program for E.A. Miller employees. He enjoyed his profession and all the relationships he developed with students and coworkers for the next 24 years. He retired from BTECH in 1995.

Russ was the happiest when he was on the back of a horse riding in the mountains. He loved horses and owned many of them over the years. He trained, showed and shod many horses. He was also the President of the Cache Valley Quarter Horse Association for a time. Much fun was had training and driving a team of cutter horses with friends. One year he drove the team, which raced on Christmas Eve, while dressed as Santa. After his body was worn out from working with horses, he started a leather business, making chaps, pillows, purses, belts and many other leather items. He even made rodeo chaps for several NFR cowboys. This past year he started selling his leather products, including stick horses, through an online platform, shipping to many states across the country and Canada.

Russ and Ruth enjoyed traveling to many places. Russ surprised Ruth with a trip to Europe for their 30th anniversary! They also enjoyed trailer travel with friends, which eventually led to them staying in St. George during the winter months for over 20 years. Here they were blessed to make many new wonderful friends. They also enjoyed taking their kids on several cruises for fun adventures in their later years.

Russ was a natural entertainer. He loved an audience to share his many talents with whether it was Cowboy Poetry, playing his guitar and singing, or telling one of his many stories. He had more one liners than anyone we know, and was all too happy to share them with anyone, even in the last hours of his life. We now find ourselves saying most of them to our kids without even realizing it. He loved sharing a joke and making people smile and laugh.

Russ was an active member of the Church of Jesus Christ of Latter-Day Saints. He enjoyed serving as leader to many young men in the scouting program over several years. Some of their adventures were a little over the edge, but they sure had fun, and thankfully all lived to tell about it. In fact, some of the boys still talk about it. Russ also served as a counselor in two bishoprics in singles wards on USU campus. He enjoyed reading the scriptures every day. He struggled after COVID damaged his eyesight, but he continued to read and study faithfully. He was also a temple worker in the Logan temple.

Russ’ main love was for his family and he never missed the chance to tell us that. He was the heart and soul of our family and greatly influenced each of our lives for good. In the past year he was blessed with four new great grandbabies that he loved snuggling. And they loved him right back.

Burial will be in the Hyde Park Cemetery. For those who would like to attend the services virtually, please use the following link: https://us06web.zoom.us/j/81890209278