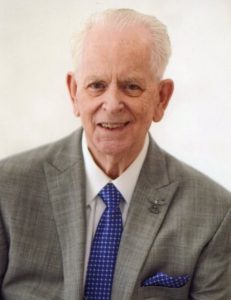 In 1967, Greg married Betty Ann Coburn. They lived in Los Angeles, CA, and had two sons: Neil (6) and Travis (2). In 1973, tragically Greg lost his wife and boys. In 1974, he met Sheralyn Atkinson Chadwick and her four children. They married in 1974 and moved to Brigham City, UT. They were later sealed in the Jordan River Temple and served an LDS Mission in Colorado Springs, CO.

Greg worked at Beneficial Finance, Sears Roebuck and Co., and the Internal Revenue Service. Greg served his country by enlisting in The National Guard in 1957, and also served in the Navy and Air Force Reserves. He was Honorably Discharged in 1977. He enjoyed sports! Loved to golf and play pickleball. He was a devoted alumnus of ISU and would take Sheri to as many basketball and football games as possible. He loved the Boston Red Sox, Boston Celtics, and the Detroit Lions.

Also surviving are his daughter Gia Mendez and two grandchildren of Long Beach, CA. Additionally, he is survived by his brother Donald (Toni) Gabbert of Saginaw, TX. Greg also had 8 Grandchildren, 13 Great Grandchildren, and 1 on the way.

We would like to give a special thanks to the Aegis Hospice team and the Maple Springs staff for the kindness and loving support.