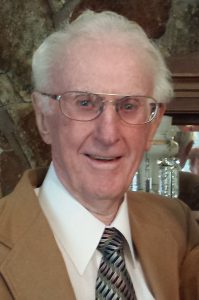 At 94 years old Reg Kirby was still out on the golf course playing 9 holes with his grandson. 12 days later he succumbed to a failing heart and passed away in peace and comfort with his daughters at his side. Reg David Kirby died on July 2, 2022.

Reg was born on October 6, 1927, the oldest son of George and Marion Kirby. In school he excelled in academics and athletics. He enjoyed a sharp mind and strong body throughout his life. As a young man he served an honorable two years as an LDS missionary in Texas and Louisiana. Upon his return he served another honorable two years in the U.S. Military as he was immediately drafted into the Korean War. After the war he became the first member of his family to attend college, earning a degree in Industrial Arts from Utah State University. He spent the next 30 years as a design engineer for Thiokol, working on such projects as the minuteman missiles and booster rockets for NASA’s Space Shuttle program.

It was at USU that he met his sweetheart and eternal companion, LaWana Jensen. They were married Aug 8, 1956 in the Logan Temple and over the next few years they were blessed with a family of 4 wonderful children. For more than a half-century he never failed to provide and care for his family. He was a dedicated and kind husband, father, grandfather, and great-grandfather. In disposition Reg was the most calm, relaxed soul you could ever hope to meet. He radiated a warm, good humor and was a perfect counterbalance to LaWana, who brought a strong personality and endless energy to their marriage and home. By way of example: he meticulously maintained the grass, trees and shrubs of the yard while she cultivated a garden full of bright, gorgeous flowers. That yard was always picture perfect. Together they were a great team.

Reg was a handyman, a repairman, an artist and a craftsman. He could make or fix anything. Over the years he always had a project, building everything from a greenhouse to a set of grandfather clocks. He painted extensively with watercolors, creating beautiful mountain vistas, lonesome rural scenes and intricate flowers.

He continued to be an avid athlete and sports enthusiast throughout his life. Around age 35 he took up golf which became a lifelong passion and he played in numerous tournaments through the years. At 45 he took his sons and other scouts on a 50-mile hike. At 52 he ran in the Golden Spike Marathon. At 80 he biked 50 miles around Bear Lake. And in his 90’s he continued hitting pars on frequent golf trips. In the morning you would find him doing the daily crossword puzzle, in the evening you’d find him watching Jeopardy, basketball, or college football. Reg also enjoyed camping and backpacking with his family in Logan Canyon, trips to his sister’s cabin in Island Park and many fishing trips with his brothers, sons, nephews, and grandsons.

He was an integral part of his children, grandchildren and great-grandchildren’s lives, attending countless concerts and sporting events throughout his life. He was passionate about genealogy and has extensive family records. He was our rock and his faithfulness, service, and kindness has touched many lives and will impact generations to come.

Final internment will be at Providence City Cemetery.