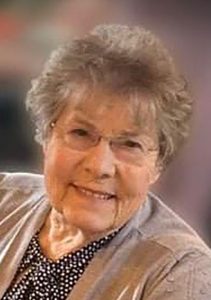 Linda Ann Wursten Keller, our beloved mother and dearest friend, passed peacefully from mortality on July 7, 2022, in Logan, Utah, surrounded by her family. She was 80 years old.

Linda was born on April 12, 1942, in Pocatello, Idaho, the youngest of three siblings of John Luther (Jack) and Mattie (Pat) Low Wursten. At the age of seven, her family relocated to Idaho Falls, where she spent the remainder of her childhood. She graduated from Idaho Falls High School in 1960.

While attending Brigham Young University she met Glenn Ridges Keller, to whom she would faithfully dedicate the next sixty years of her life. They were married on October 19, 1962, in the Idaho Falls LDS Temple; soon thereafter they established their home and family in Cache Valley.

Linda graduated from Utah State University in 1966, earning her Bachelor of Science degree in Home Economics Education. She subsequently taught home economics at North Cache Junior High School in Richmond, and consistently volunteered her time and talents in other educational capacities, including as a leader of the PTA, Lambda Delta Sigma sorority at USU, and Daughters of the Utah Pioneers.

Linda’s motherly qualities and homemaking capabilities were superb and unparalleled. Whether family, friend, or stranger, all in need of physical, social, or spiritual sustenance were openly welcomed and served in her home, regardless of the hour, situation, or depth of acquaintance. Such visits were accompanied by Linda’s remarkable ability to individualize each interaction that reflected a level of caring attention and love rarely equaled, and that left many to marvel at her selflessness.

Throughout her life, Linda spoke honorably of and held a fierce reverence for her heritage. She frequently referenced the extreme level of sacrifice her forebears made to emigrate from beloved lands to Cache Valley, a place her Swiss ancestors lovingly called ‘Little Switzerland’. Emulating these ancestors, she served for countless hours in the Logan LDS Temple, coordinating youth visits to the baptistery. Her disposition was ever responsive to the warnings and whisperings of the Spirit of God, which ultimately positioned her to save the lives of her family members on multiple occasions.

Linda served in many diverse capacities within the LDS Church, and in her beloved Providence. Emblematic of her lifelong devotion to Jesus Christ, from 2006-07 she served with her husband in the Ohio Cleveland-Akron-Kirtland Mission. She strived to galvanize the Ohio youth into greater Church activity, and persistently encouraged their involvement in the Church Educational System. She also served as the scribe for nearly 700 patriarchal blessings. Linda never faltered in her defense of immutable truth, and endured admirably to her appointed end. For this, ‘her children arise up, and call her blessed.’

Her family includes seven children, 29 grandchildren, and 10 great-grandchildren. She is survived by her daughter Julie (Chris) Kelly of Jasper, Indiana, and sons Brent (Linda) of Providence, Brian (Stacie) of Eagle River, Alaska, David (Stacy) of Paradise, Paul (Angie) of Logan, Steven (Megan) of Idaho Falls, and James (Angela) of Browntown, Virginia. She is also survived by her brother Richard (Linda) of Hyrum, and was preceded in death by her late husband, parents, one brother, and one great-grandson.

Funeral arrangements will be under the direction of White Pine Funeral Services, where a viewing will be held from 6-8pm on Friday, July 15.

Funeral services will be held at 12pm on Saturday, July 16, at the LDS Church located at 155 North 100 East in Providence.

Those who would like to attend virtually may use the following link: https://us06web.zoom.us/u/kdMWpIee71

Interment will be in the Providence City Cemetery.

FAA gets more than 57,000 applicants for air traffic control jobs