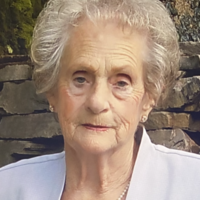 Norma Jean Thomas, age 90, passed away peacefully in her home September 3, 2021 of natural causes.  She was born June 19, 1931 in Malad City, Idaho to Samuel and Elsie Thomas.  She was married to Ralph A. Jones, later divorced.  She moved to Utah where she worked and raised her three children.  She spent most of her career as a Medical Assistant at the Salt Lake Clinic. She later moved to Bellevue, Idaho, where she loved being close to her sister, Faye and brother-in-law, Boyd.  Later, she returned to her hometown of Malad where she resided until death.

Norma loved cooking for friends and family.  She enjoyed planning large family get-togethers where she would make her famous Chinese food dinners for aunts, uncles, and cousins.  Often referred to as “the pie lady”, she loved making pies for all occasions, with banana cream pie as her specialty.

Her family gatherings often ended with a great game of cards.  She was up for a poker or pinochle game any time, and didn’t feel bad about taking pennies from her grandkids if she won fair and square.  Being a staunch democrat all of her life, the games typically included some political debate, as the topic found its way into most conversations.

Norma was a mother and a grandmother and they were the love of her life. She was “Grams” to her adored grandkids and her great grandchildren.  Throughout her life, she spent a lot of time with her oldest daughter and her family in Salt Lake City.  Rarely was there a Malad Dragon sporting event that her grandsons or granddaughter participated in that she missed.  And the last five years, Norma spent with her grandson, Jason, and her granddaughter, Ashley, always close by to lend a helping hand whenever needed.

Norma is survived by many she loved deeply: her daughter, Patricia Malmstrom (Rick); son, Craig Jones; and daughter Brenda Gugelman (Wayne); 6 grandchildren; 13 great grandchildren; and her loving niece, Paula. Her grandson Jason and granddaughter Ashley were an added comfort and love as they provided her with the love and help she needed.

A celebration of life will be planned at a later date.