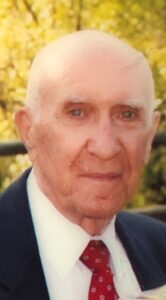 Paul Doyle Nelson pass away on September 5, 2021 at Bear Lake Memorial Hospital from complications of COVID. He was born on March 23, 1927 in Bloomington, Idaho. He lived his childhood years in Bloomington, and left to join the Navy at the end of WWII, where he served as a medical corpsman. He attended college after honorable discharge from the Navy and obtained a Bachelor’s degree in history. He taught American and World History for over 40 years, the majority of his career being in Idaho Falls and Idaho Falls High School. Paul was incredibly knowledgeable in history, and to the day of his passing former students commented on how well he taught and how he made history exciting and dynamic with his knowledge of details. He fulfilled a lifelong dream by retiring to the Bear Lake valley, and lived in Paris until close to the time of his death.

He was an active member of the LDS Church as was his beloved wife, Venita, who joined the church over twenty years ago. He met and married Venita while teaching in Ogden, Utah, before moving to Idaho. They were married for over 62 years, and he was a devoted and loving husband and father.

Paul enjoyed walking and did so his entire life, still attempting to walk in the days preceding his illness. He used a beautiful walking stick to maintain his exercise, gifted to him by son-in-law Rick. He traveled extensively in the United States, a passion he enjoyed with his wife and children when they were young.

He was preceded in death by two brothers, Dean Nelson and Harold Nelson

Services were held with a viewing on September 11 at Matthews Mortuary, and a graveside service for the family at Bloomington Cemetery following the viewing.

Paul was kind, compassionate and giving, and his spirit will live on with us forever.

If friends wish to give flowers to the family, it is requested instead that small donations be made to the American Cancer Society.