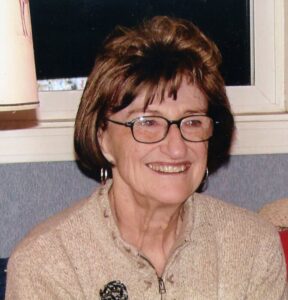 Lorna Ravenberg passed away on September 16, 2021, of natural causes at the age of 93, and is now in the hands of our Lord and Savior Jesus Christ. She entered this life on April 28, 1928, to James and Elizabeth Morrow McGuigan in Winnipeg, Manitoba, Canada.

When most people hear the name Lorna Ravenberg, they think of the slender woman who worked efficiently at her desk on the top floor in the Box Elder County Courthouse – a woman who loved and enjoyed people and kept a covey of county commissioners on track and in line for many years.

But administrative secretary was just one of the numerous hats this energetic woman wore. She was also Clerk of Session for her church, mother, grandmother, and great-grandmother.

Lorna’s story began in Winnipeg, Canada, a long way from Brigham City. At 23 years of age, she took a job with an airline to get a glimpse of the world outside those Canadian boundaries.

After experiencing many travel adventures including employment in Hawaii, she met Darrell Ravenberg, a native of Utah. The two were married and settled in Ogden. That city was their home for several years before the couple decided their three children, they now had two boys and a girl, needed to have a country upbringing. The family bought a farm just outside of Brigham City. That was 55 years ago.

When Lorna’s children were all in college, she decided it was time to “trade in the tractor for the typewriter” and she began working part-time at the then county-owned Pioneer Nursing Home. Her pleasant attitude and great work ethic soon earned her promotions. In 1986 she was put in charge of payroll and personnel, as well as patient accounts.

Lorna moved from the care center to the commission chambers in February of 1991. For 16 years she was the constant in the office as a host of commissioners came and left at the direction of the voting public.

When it came to hobbies “There’s not time for such things, unless one considers my chocolate indulgence a hobby” she would often say.

In 1996 Lorna was selected as Box Elder County’s Outstanding Employee of the Month.

Lorna retired in 2009 at the age of 81 and then began volunteer work for several years at the Brigham City Community Hospital.

Lorna was preceded in death by her parents and husband.

Celebration of Life Services will be held on Saturday, October 2, 2021, at 10:30 a.m. at the Community Presbyterian Church, 122 East 300 South, Brigham City. Light refreshments will be served after the service.

Link for the live stream and recorded service: https://www.youtube.com/watch?v=VSA4eKfgEMg

The family would like to express sincere gratitude for the wonderful care given by all the nursing and management staff at Maple Springs, Integrity Health, and Utah Mobile Physicians.