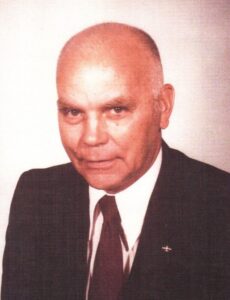 He was born on January 14, 1922 in Blackfoot, Idaho, the son of John Davis and Ione A. Gilchrist Chapman. Harold served in the Army Air Force during WWII and the Korean War.

He married Alice Opal Pittman on April 1946 in Ashburn, Georgia. They later divorced. He married Trysa Jenevieve Buchanan on August 8, 1947 in Provo, Utah. Trysa passed away on May 30, 2005.

Harold was a member of The Church of Jesus Christ of Latter-day Saints. He was a scouter, serving as a Scout Master, Explorer Advisor, and Pack Master and received his Silver Beaver Award. Harold also served as a High Councilor, Bishopric Counselor and several other callings.

He worked as a Foreman for aircraft maintenance at Edwards Air Force Base. He enjoyed camping, backpacking, fishing, woodworking, and metal work. He also enjoyed being a mechanic, working on house repairs, and building.

Funeral services will be held on Saturday, February 20, 2021 at 2:00pm with interment at Lindquist’s Memorial Gardens of the Wasatch, 1718 Combe Road, South Ogden, Utah.

Services will be live streamed and may be viewed by clicking here and scrolling to the bottom of the page.

The family would like to thank the staff and personnel at Maple Springs in Brigham City for three years of caring service.