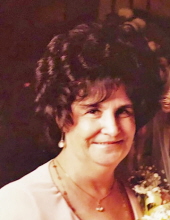 Carma Ashcroft Meyers passed away peacefully February 14, 2021 to join her sweetheart husband on Valentine’s Day, whom she missed dearly.

She was born in Hyde Park, Utah to Herbert and Tedora Ashcroft on June 7, 1928. Carma was one of twelve children and was the last surviving sibling.

Carma married Clifford Meyers on October 31, 1952. Married on Halloween, Clifford love to tease her and tell everyone that he “snatched her off her broom and married her,” much to Carma’s delight.

Carma loved road trips, usually to Mesquite, Jackpot and Wendover with her husband and often one of her two sisters Melba and LaRue. They had such a great time together and would always laugh at the trouble they caused her husband and the fun they all had. She was delightfully feisty and was quick to voice her opinions. Her quick wit will be dearly missed.

The family would like to thank Legacy Village Memory Care for the many years of excellent care as well as Silverado Hospice with a special thanks to Josefa for the outstanding care and thoughtfulness she gave Carma.

Condolences and memories may be shared with the family at Jenkins-Soffe Funeral Chapel.