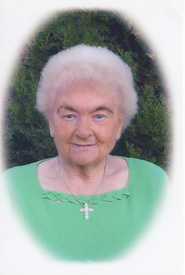 Eva was born April 21, 1920, in Carmyle, Scotland (a suburb of Glasgow)—the oldest daughter of Margaret Richards and Robert Liddell. She grew up in Carmyle with her two brothers and a sister.

She married John Peter Risk in Carmyle, where they had two sons, John Robert and Harold, before immigrating to the United States in 1953. After moving their little family to Logan, Utah, they had three other children: Thomas, Robert, and Eva.

John and Eva, along with their two young boys, immigrated to America after the end of World War II. Eva’s sister, Alice, had met and married an American soldier, Harvey Hardman, who was stationed in Scotland during the war. Known as “war brides,” Alice followed her husband to America to Logan, Utah—where shortly after, Eva and Alice’s parents joined them. A few years later, Eva and John made the decision to leave Scotland and move to America to join her sister and parents. Their little family boarded the “Queen Mary” and sailed to the U.S., arriving in Ellis Island May 19, 1953. They settled into their new life in Logan.

Although Eva lived the last half of her life in America, she always held a special place in her heart for her homeland Scotland. She and John never became American citizens but were Residence of the U.S.A. and British Subjects: Citizens of the United Kingdom and Colonies.

Eva had a talent for music. When she was young, she taught herself to play the piano and always played at family gatherings. She had a beautiful voice. One of her childhood dreams was to be an opera singer. Her children remember how she was always singing while working around the house.

Everyone who met Eva loved this wonderful, little Scottish lady. She might have been small in stature, but she had a strong spirit and was known for her contagious laugh, playful sense of humor, positive outlook on life, and joy for living.

She loved her family and was very proud of her children. She is survived by three sons and one daughter: John Robert Risk (Anna), Logan, Utah; Thomas Muir Risk (Debbie), South Jordan, Utah; Robert Risk (Ilene), Sandy, Utah; and Eva Atkinson (Rick), Franklin, Idaho; 9 grandchildren; and 6 great-grandchildren. She was preceded in death by her husband, John Peter Risk, and son, Harold Liddell Risk.

The family would like to extend a special thank you to the wonderful staff at Golden Living/Assisted Living, Taylorsville. She made so many good friends there, and the care and love they gave her made her feel like it was truly her home. We would also like to give a special thank you to the staff at Health Watch/Home Health and Hospice—especially her hospice nurse, Mark Lopez. Words cannot express the gratitude and love we feel for him for the loving care he gave to our mother. We will always be grateful. She loved all of you.

Condolences and memories may be shared with the family at Larkin Mortuary.