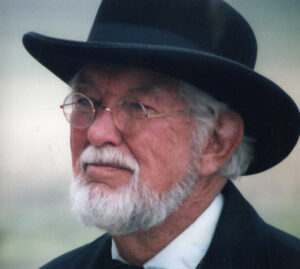 The whistle blows one short whistle and the 4449 Daylight locomotive comes to a stop. “All Aboard!” shouts the conductor. Then two long whistles, and off it goes on a “Sentimental Journey”.

The day is February 2, 2021. The weather is cold but calm, and there is a peaceful, loving, tenderness in the home of George G. Ward.

George G. Ward was born March 28, 1928, son of Maria Aguilera and Alvin Glenn Ward. He grew up in San Francisco with his brother Richard. He joined the Navy in 1945-1949 and served honorably in WWII.

He was a shoe salesman, a lineman, and apprentice mechanic, an assistant manager for a finance corporation, and he retired in 1992 from Mcdonnell Douglas/Boeing where he worked in Quality Assurance, and was a Field Rep for space vehicles for 33 years. In his spare time he taught Hunter’s Safety and Eddie Eagle gun safety to young children. He loved wildlife and served as president of the Wild Association.

George loved hunting and camping and everything about nature and wildlife. In fact, he loved all animals, big and small. He loved to sit and watch the birds at the feeder through our front room window, and he could name them all. He especially loved our little dog, Moochee. He enjoyed scoping the mountains for any wildlife he could find; deer, elk, moose, bear, fox, and sometimes unidentified creatures moving around.

He also loved everything about trains. From toy trains that go around the Christmas tree, to scale model trains that traveled on his state of the art layout he engineered, with trains running everywhere, even around the ceiling. Then there were the big trains, the real steam locomotives that he took many excursions on. There were the Jupiter and 119 out at the Golden Spike site, where he volunteered and was a member of the reenactment cast. He also volunteered at the Brigham City Depot.

It was at the Golden Spike Ball where he met Annette Glover, and they were married soon after in 1999.

George was a patriot. He loved his country. The American flag has always flown high on the flag pole in his yard.

He was a jack of all trades. He could fix anything; from broken eye glasses, to burnt out Christmas tree lights, to household appliances, to car engines, to jet engines …. And sometimes broken hearts.

He believed Bigfoot is out there somewhere and even went on a Bigfoot excursion with his son and daughter-in-law, and brother. They never found Bigfoot but they found his track and it was enough to keep him believing.

He was interested in Medieval times and the Knights Templar. He liked reading and learning all about them. He was my Knight in Shining Armor.

He loved looking through his telescope at the night skies, and he always believed, “The truth is out there”. He was the best of the best kind of person; kind, caring, unselfish, giving, helping, decent and good. He had many interests but he enjoyed his family and friends the most.

There are no words to express how much he will be missed.

Special thanks to Brigham City Hospital Staff and Bristol Hospice, and to his family for all of the love, tender care and help.

The whistle blows one short whistle and the 4449 Daylight has reached its final destination and completed its journey “Home”.