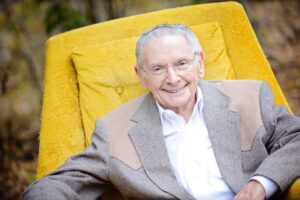 Our loving Husband, Father, grandfather, great-grandfather, and veteran Dennis Henry Wilson passed away peacefully at the age of 86, on July 15, 2021 in Wellsville, Utah.

Born to Henry and Wynona Wilson in Salt Lake City, Utah, Dennis was the oldest of eight children all brought up in a home where they were taught to love and serve The Lord and his fellow men. “Denny” lovingly called by his family and friends.

When he was seven his family moved to Clearfield, Utah, he was interested in radios, and wanted to be the next Singing Cowboy, he even took Hawaiian Guitar lessons.

He graduated from Davis High in 1952 and was called to serve a Stake Mission until his family moved to Draper to pursue farming.Dennis enlisted in the Air Force in 1954 and after Basic training and was sent to Laon France and had several assignments to Africa, Germany and Italy. Dad worked with Radar and electronics but was often called upon to help with whatever was needed.While serving overseas his Chaplain told him. “If you follow the commandments the Lord would stack the deck for you.” Which proved to be true on many occasions.In the Reserves he was able to travel and see most of the world, but loved coming home to family and friends.

After returning from his assignments overseas he met Vernetta Call, the love of his life, and on December 4, 1958 they were sealed for time and all eternity in the Salt Lake City Temple. They lived in Layton for many years until moving to Wellsville in 2008 with his son and daughter Mark and Tracie Wilson. While in Layton Dennis and Vernetta made many lifelong friends, and managed their big, beautiful yard.

Dad learned the value ofhard work and service from his parents and exemplified those attributes his whole life, finding ways to serve, donating his time or money to whoever needed it, wherever he was. He would pick up hitch hikers and give them meals and money.

He Loved the Lord and served several Stake Missions and many other callings  SundaySchool Presidency, and enjoyed serving in the scouting program.His favorite callings though, were as a home teacher and minister, because he loved the opportunities to get to know, love, and serve others.Dad was a humble behind the scenes kind of man. He served in so many ways but never wanted any recognition for it.

Dad was the one who got his children hooked on camping, fishing and rock hunting.

Even when he wasn’t doing his assignments and callings dad often spent his free time serving the elderly, helping missionaries, and serving on the stake farms. He spent many hours serving his in-laws, then his parents with their needs as they grew older.He was a loving and serving companion to his wife who suffered many years from debilitating Neuropathy and missed her terribly after her passing in 2009.Dennis and Vernetta spent years researching their family history and filling books with written histories and photos of their ancestors, then doing their temple work.

Dad was a computer and tech geek, fascinated by electronics he was always working on some project that would help make things better. We had an Atari System as soon as they came out and dad had a Brick of a cell phone as soon as they were available.

While working full time at Hill Air Force Base, helping with Vernetta’s catering business, and serving in Scouts Dad graduated from Weber State University with a Bachelor’s Degree in Social Sciences.During his time on base he, Vernetta, Dean, and Viola opened a catering decorating business where he helped build most of the decorations. At the events they catered Dennis would also work behind a camera as a professional photographer. At Hill Air Force base, he worked on the F105’s and F16s until retiring from the Air Force Base and the Air Force Reserves. Dad said he was not retired just rehired and he went to work for Davis School District as an amazing Bus Driver and friend to hundreds of children. He was still in contact with some of the children.

Out of all the many things dad accomplished and the countless hours of service the thing he loved the most was his family. He was proud of them when they succeeded, and supportive of change and in challenging times. He was not impressed with what you had, but by who you were, how you served, and what you would do.He often showed his love by making his famous homemade root beer and fudge.

Dad struggled with dementia over the past five years yet would still ask “Are you okay? Do you need anything? How can I help you? Can I help you forget you anything?” and would say“Well my family sure takes good care of me.”“Thank you” was his catch phrase, even when you had him do something he really didn’t like.

He still knew the Lord and you could often hear him praying.

This is a quote from his life history:“One thing that stands out in my mind I would like everyone to know. In everything I have done, I have found that the more I follow the commandments, the more He helps me. He hasn’t made me wealthy in worldly things (probably a good thing), but more than my share of health and spiritual blessings for me and my family.”

Dennis was preceded in Death by his Eternal Companion Vernetta Call Wilson, his parents and many siblings.

We love you daddy and know there is a joyous reunion on the other side of the veil. Until we meet again.

In lieu of flowers,because of Dad’s great love of Missionary Service and tender place in his heart for Special Education Children we invite you to donate to one of these causes in his memory.

A special thank you to Mark and Tracie for the many happy years he spent with your family and to Mike and Vera for having Dad in your home for the last two years and all your loving care.

Dennis’ Family would like to thank Dr. Stuart Knapp for his kind and good care; The Franklin County Hospice Coordinator, Nurses, and Sunset Valley Mortuary.

Condolences and memories may be shared with the family at Sunset Valley Mortuary.