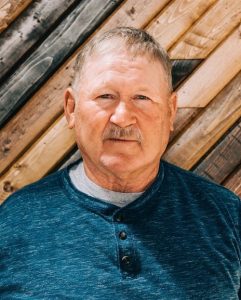 The man, the myth, the legend, William Dwaine Kossman (69) or as we all knew him “Frenchy” returned home to his Heavenly Father on June 21, 2022. He passed away due to a UTV accident in Promontory, Utah.

He was born July 8, 1952 in Burley, Idaho. He was the seventh child born to Richard and Ella Kossman. He grew up on The Old Ranch in Malta, Idaho where he learned to work hard alongside his family. He was a self-proclaimed pogo stick champion—proudly telling everyone how he could pogo up the lane to get the mail and back. He attended Malta Elementary and Raft River High School where he was a member of the FFA, the senior class president, and was involved in various sports.

On November 3, 1973, Frenchy finally convinced his high school sweetheart Joy Montgomery of Yost, Utah to marry him. They were later sealed in the Logan, Utah LDS temple on May 29, 1979. Together Frenchy and Joy raised their two daughters Misty Jo, and Kendra Lynn and sister-in-law Cindy Montgomery who often stayed with them and they considered one of their own.

He took pride in every job he did. He started his career at Interstate Feeders Feedlot as the Feed Boss. In 1976 he went to work for Jack and Mabel Pierce on their ranch in Malta, where he gained a second family. Jack taught him so many valuable lessons that he has reiterated countless times to his family.

In 1987 they moved to Honeyville, Utah to start a new phase of life. Leaving Malta was one of the hardest things Frenchy would do. He started work at Morton Thiokol. He later left to start his own handyman and landscaping business, “The French Connection” where his focus was maintaining the grounds and buildings of local churches. He was a Jack of all trades. He was passionate about caulking, painting, planting, weeding, mulching, and fixing sprinkler systems. He rarely sat still, so after retirement he took a seasonal job at the Box Elder County Weed Department.

He was an active member of The Church of Jesus Christ of Latter-day Saints. He served as Elders Quorum President, Scout master, and Sunday school teacher. He was the definition of a true minister. He once said, “I do all these acts of kindness so people have good things to say about me at my funeral.” The hours of service he provided to his family, friends, neighbors and strangers are uncountable. If you needed something done he would just show up and get it done with or without your help (preferably without) and whether you asked him to or not.

After only having daughters, he was ecstatic to have grandsons. “Papa” was their loudest fan and loved cheering them on no matter what they were doing. His granddaughters held a very special place in his heart, they had him wrapped around their fingers. His grandkids include: Ethan, Paden, and Emmet Holland. Jaxon (Makenna), Clayton, Hallie, and Olivia Douglas. His honorary grandchildren (from Cindy and Shawn Nicholas) include: Shayna (Justin) Capener, Kaycee (Thatcher) Smoot, Dayton Nicholas and Tait (Taloxie) Nicholas. His honorary great-grandkids include: Nixon and Mori Smoot and Ella Capener.

Frenchy was the best gag gift giver, the life of the party, and enjoyed being the center of attention. He loved making people laugh (especially himself) and always had a joke to tell. He loved to oversee the cooking at any event. He would often ask the cook, “Have you got your cooking merit badge?” He often found many “treasures” in dumpsters or along the side of the road. He loved the D.I. and was always so proud of the things he could find there. Another man’s junk was Frenchy treasure.

You could often find him working on projects at his property in Yost, Utah. He spent countless hours there camping, and riding four-wheelers with his family. When he found time to relax you could find him coaching the Jazz and watching football. He may be gone but he has spent a lifetime making sure he will never be forgotten.

He is preceded in death by his parents: Richard and Ella Kossman. Siblings: Wanda Hutchison, Kennth Gayle Kossman, Glenn Kossman, mother and father-in-law: Yale and Nelda Montgomery, and seven in-laws.

Interment will follow the funeral service at the Yost Cemetery, in Yost, Utah.