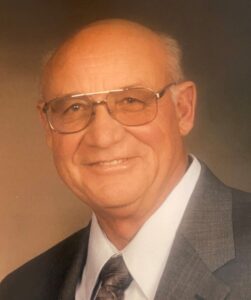 Our loving Dad, Grampi, and friend, Wayne B Gibson, 84, passed away on Saturday, December 4, 2021 at Intermountain Medical Center. Wayne was born on June 15, 1937 in Ogden, Utah, the son of Louis Bitton and Delia Elizabeth Bennett Gibson.

Wayne met his sweetheart, Carolynn Gould at Weber High and they were married after graduation on his birthday, June 15, 1955 in the Salt Lake Temple. She preceded him in death on October 10, 2013.

Wayne was a devoted disciple of Jesus Christ. He served Father in Heaven in various ways and through many church callings, but most importantly by loving everyone that he was around with an unconditional love. He had a desire to help every person that he met because he knew they were a beloved child of God. During the time he served in the Stake and Ward Sunday School he fondly remembers hosting President Nelson, as President of the General Sunday School.

Wayne was extremely proud of his heritage, posterity and farm. Wayne believed in the miracle of Agriculture and was part of making it grow. Our 150 year old farm in West Weber eventually included 7 generations. He got to go to work every day with five of those generations over his lifetime, starting with his Grandpa Heber and ending with the crazy kids he got to work with today. He was a successful dairy farmer owning Gibson’s Green Acres Dairy. He farmed right up until the end of this year’s harvest in November, driving the biggest GREEN tractor on the farm. He told his daughters when he was feeling good on Friday he would be in the tractor Monday morning ready to go.

Wayne taught us all that to be successful in life, we needed to give back to the community we live in. He loved being a member of the Farm Bureau, served on the Board and was Weber County President. He was also on the State Board of Directors. Wayne was a leader as a board member of Weber Basin Water District for nearly 30 years, and President several times. He was appointed by President Reagan to serve on the State ASC Committee. Wayne spent a lot of time on the Weber County Planning Commission building a community to be proud of.

He cherished his farm and family. He was our family patriarch, our mentor, and our greatest support. He was passionate about the agricultural industry and was known for his foresight and proactive approach in farming practices. In his later years he enjoyed packing the corn silage pit with precision, going to Bear Lake, visiting Country Corner, scheduled morning and evening phone calls with his children, and working in his yard with them. He enjoyed watching his children, grandchildren and great grandchildren in all their pursuits. He loved spending his time at the farm with his loved ones. He was a Facebook connoisseur. Anyone who knew Grampi loved him and knew that he loved them too.

He was preceded in death by his parents, his sweetheart, Carolynn; two grandsons, Jerry Wayne Davis and Brandon G Thurber, one great granddaughter, McKenzie Beth Bitton, and one sister, LuJean Harper.

Click this link to view additional details about Wayne’s Services, including any available live streams: https://my.gather.app/remember/wayne-gibson