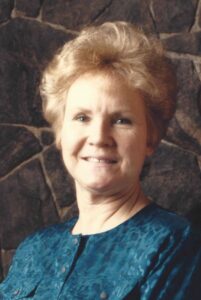 In loving memory of Vonda Kent Holt, wife, mother, grandmother, great grandmother passed away 11 December 2021 with her husband and son nearby. She was born 27 Feb 1934 in Cornish, Utah, a daughter to Ed and Grace Cole Kent. She married her husband William (Bill) Holt 22 April 1966 in the Logan Temple of the Church of Jesus Christ of Latter-day Saints in Logan, Utah. Vonda graduated from North Cache High School in 1952. Also from the seminary program, she also served a mission to Tennessee for the church. She held many callings in the Lakeview Ward in Brigham City and supported her husband in his. She had a strong testimony of her Savior, Jesus Christ and His Atonement, and loved to serve others.

Vonda had many health issues during her life and fared them well. Her family was everything especially her 6 grandchildren and 3 great grandchildren. She saved everything and anything that had to do with them. She loved the outdoors. When she married Bill they took two full weeks plus and visited all of Utah’s National Parks and some of its State Parks. Also National and State Parks to the North of Utah. One experience in Yellowstone, which was her favorite, she stopped in Canyon, her husband asked a park ranger where the best fishing was at the time. He directed us to 7-mile hole. On we went to this hike. There were many steep and sharp switchbacks and ended up at the bottom of Yellowstone Falls. The fish were unable to navigate the falls and were sizable and very catch-able, almost too many and the fun went away. On the return trip Vonda said it must have been the 14 Mile Hole. Vonda and Bill lived at the Bear River Club Co. (known as the Millionaire Duck Club). Where Bill assisted managing the club. There she learned to fish and even shoot a shotgun. She was happy when she move into Brigham City.

She was preceded in death by her parents and one brother, Edward Allen “Sam” Kent.

Click this link to view additional details about Vonda’s Services, including any available live streams: https://my.gather.app/remember/vonda-holt