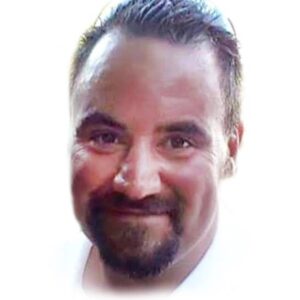 Trevor Rex Larsen returned to his Father in Heaven unexpectedly on October 3, 2021.

Trevor was born on August 14, 1981 in Logan, UT to Rex Larsen and Susan Ropelato Larsen. He was their only child.

Trev married Nikeeta Bankhead Larsen on September 18, 2009. Together they had one son, Troy William. They were later divorced. Troy was the light of his Dad’s world and his Dad was so proud of him. Troy misses his Dad more than words can explain.

Trevor proudly worked for LeGrand Johnsons Construction for the past 13 years as a loader operator. LJ all Day!

Trev was everybody’s friend with an infectious belly laugh. He was a giant teddy bear and you always knew when he was around because you could hear him from a mile away. Though he had some hard times, and faced many struggles he had a heart of gold and would do anything for anybody.

Trev loved to ride his bicycle and could often be found cruising around with his headphones blasting. Rain or shine or even snow he was out on his bike. He also loved music and loved creating music using his beat machine. If you were lucky you heard him singing his heart out.

Trevor is survived by his son, his parents, his Grandma Sharron Larsen, and many Aunts, Uncles, and cousins.

He is preceded in death by his Grandparents Roy and IvaLou Ropelato, and his cousin Brandon Ropelato.

Trev, we love you
Yes we do
Yes it’s true.