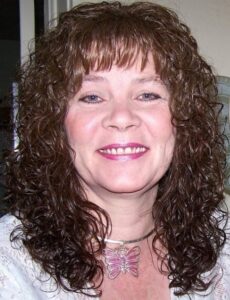 Heaven was blessed on November 16, 2021 with the arrival of Theresa Mae Stone Hayes. Devoted and loving Mother, Step-Mother, Grandmother, Daughter, Sister and friend. Theresa passed away unexpectedly due to an undiagnosed heart condition.

Theresa was born on January 2, 1960, in Pocatello, ID to Dennis C Stone and Elizabeth (Betty) Carter Stone. Theresa passed at the young age of 61. Theresa had been ill (non heart related) for several years but in her health she loved taking care of others. Theresa worked in the home health field and cared for her patients so much she would even visit them on her time off. Theresa cared for two elderly ladies in her home for a number of years. Theresa also took in troubled teens and worked hard to set them in the right direction. Theresa was married at a young age to Steven Gambling and had a Daughter Ashley Gambling. Theresa Later married Barton Hayes and had a son Chantry Hayes and gained a Step Daughter Regan Hayes.

Theresa loved to decorate, crochet and was a talented crafter. Theresa remodeled her home and did most of the work. She was also hired on several occasions to decorate others’ homes. She was incredibly talented. Theresa loved the outdoors. Theresa was a generous soul and helped others anytime she could. Theresa was an amazing cook and loved to feed her friends and family. Theresa was blessed with an incredible, kind and caring best friend Eileen Varner Evans. They spent a lot of time together and both had a deep love for the Lord. Theresa was a devoted Christian and loved serving the Lord. Theresa will be very missed by her family and friends but she is no longer in pain and has been reunited with her husband, Barton Hayes.

Theresa was preceded in death by her Mother Elisabeth Pierce, Husband Barton Hayes and her Grandparents.

Theresa wished to be cremated. There will be a memorial in the spring (time and the date has not yet been set).