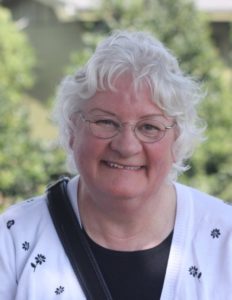 She was born February 5, 1952, in Brigham City, Utah to Arvid Herbert Stromberg Anderson and Amy Marlene Hess Anderson. She was the second of six children and the oldest daughter.

She married Lamar Glen Udy, of Fielding, Utah, February 25, 1972. The marriage was later solemnized in the Salt Lake Temple May 25, 1973. Lamar and Susan met through Susan’s cousin and Lamar’s best friend, Rex Godfrey, who grew up down the street from Lamar. In 1974, Susan and Lamar built a new home in West Valley City, Utah, which they still own today.

Susan spent her early years in Snowville and Tremonton, Utah, until the family moved to Kearns, Utah, when she was 11 years old. She graduated from Kearns High School in 1970. Susan worked with her mother and brother, Alan, at Woolworths. She also worked at Mountain Bell, Beehive Clothing with her mother, and then a short stint at USPS.

She served in various callings as a lifelong member of The Church of Jesus Christ of Latter-day Saints. Susan enjoyed genealogy and family history research. She assisted her father by ordering and distributing copies of the book he put together of his parent’s family history.

Susan was a talented seamstress and enjoyed crocheting and took pride in her ability to type at an above average speed. Throughout her life, she made countless baby blessing dresses, tied several quilts, and even crocheted her own kitchen dishrags among many other projects. She also enjoyed cooking from scratch and bottling fruits and jams.

Family meant everything to Susan, and she kept in touch with her immediate and extended family regularly. Susan had an impeccable memory and could remember important dates including birthdays and anniversaries of everyone she met. She enjoyed playing the piano she bought from her father and appreciated the musical talent of her son-in-law, daughters-in-law, and grandchildren.

Afterward, there will be a procession to the interment site at Fielding Cemetery.