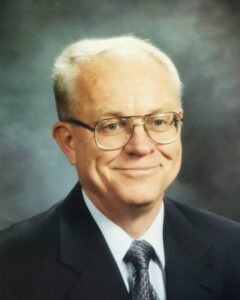 Steven Wood Dabb died peacefully at home in the early morning of April 18, 2021. He was the fourth of five children of Clyde Lewis Dabb and Edna La Rene Wood. He was born on May 25, 1943 in Ogden, Utah at the Dee Hospital, then located at 24th and Harrison. He was preceded in death by his brother Lewis, his wife Meridee, and his sister Eylene. Surviving are his children Joseph (Gloria) and Patricia, grandchildren Ivonne, Steven, Zackery and Sarah.

Stevie grew up on a farm in Syracuse, where he learned to work hard and care for animals. He also loved to hunt and wander outdoors, often accompanied by a hunting dog.

Steve was an active member of the Church of Jesus Christ of Latter-day Saints his entire life. He served in the Alaskan-Canadian Mission (1962-64) where he developed a great love for the Canadian people and the Haida Indians.

Steve married Meridee Olsen on August 30, 1965. They were married 35 years until her passing in May 2001. Steve was a teacher for Weber School District, sharing his humor and curiosity about nature and geology to a generation of young minds. Steve spent his retirement years hiking and gardening, often helping his neighbors keep their gardens beautiful as well. He was actively involved with Boy Scouts of America teaching boys survival skills and appreciation of the outdoors. When his health no longer permitted him to be as active, Steve still spent plenty of time outside, watching the mountains and the birds at the bird feeders he had built with the family dogs right beside him. Steve loved biographies and other nonfiction and read or listened to books until the very end of his life.

Steve was a force of nature. He could accomplish more in one day than most people do in a month. He always had a well-tended garden which consisted of a variety of vegetables, his favorites being tomatoes and corn. He was stingy with neither and gave out produce to his neighbors in copious quantities. Steve was an outstanding artist and made beautiful wood carvings which he lovingly gave away to his family and friends. He also carved glass and obsidian into beautiful arrowheads which he fashioned into necklaces and jewelry. Steve made marbles out of clay and decorated them with special glazes and bits of copper and brass to bring incredible colors and designs.

Graveside services will be held on Saturday, April 24th at the Syracuse Cemetery located 1250 S 1000 W, Syracuse, UT for anyone desiring to attend.

The services will also be live streamed at the following link: www.myers-mortuary.com To watch scroll to the bottom of Steve’s obituary on Saturday at 1:00 p.m., where condolences may also be sent to the family. If unable to watch at this time the service will be on our website indefinitely.

In lieu of flowers, Steve desired that you take your family out to dinner or help someone in need with that money.