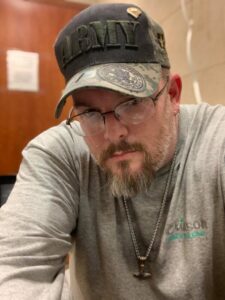 Steven (Steve) Neal Briggs was taken from us way too soon doing exactly what he loved.

He was welcomed to heaven by his hero and father on April 23, 2021 to help blowout his dad’s birthday candles.

Steve knew no stranger. Everyone he came across soon become a friend and was subjected to his witty banter and dry humor. Having a heart of gold, he would do anything he could to put a smile on your face and make you laugh. You never knew what words would come out of his mouth next, but you were never really surprised with what it was either.

He had a new found love and passion for the open road on his motorcycle always pushing the limits. He loved the adrenaline rush that came with it. He loved riding with his brother & closest friends, taking up the back just to make sure they were safe.

He loved to take pictures and video to share his many adventures as he drove across the county in his proudly owned semi-truck. His dream was to have a trucking company to carry on the legacy of his dad, who was also a truck driver.

He was proud to be a US Army Veteran. Where he served as SPC from 1991-1999. He placed a huge emphasis on GOD, Country, Family. Making this his moto in life.

He may not have had his own kids, but he felt as if his 6 nieces and 1 nephew was the children he never had. He would do anything for them and loved spending time with them as they grew. He tried his best to never miss an important milestone in their lives.

He was so excited when he purchased ground in Scotland to finally achieve the status he had already given himself and soon requested to be known as “Lord Steve Briggs”.

He is proceeded in death by his Father, Zane Briggs, biological mother Debra Butler, his grandparents John & Ruth Briggs, Robert & Olive Butler, and Clyde Anderson. As well as several aunts, uncles and friends. What a party he is having now.

In lieu of flowers the family wishes for donations to go to: Fallen Riders Fund Idaho