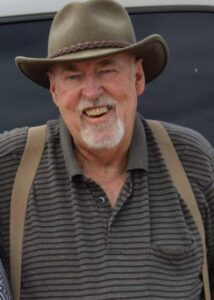 Roy E Stevens, beloved husband, father, grandfather, and friend, passed away November 12th, 2021 at his home surrounded by his loving family after a courageous battle with cancer. He was born August 9, 1946, in Fillmore, Utah to Earl Orson and Lola McKee. He attended school in Holden and Fillmore, Utah. He graduated high school in 1966. After graduation he served an LDS mission in Ireland. In April 1970, he joined the United States Army. He was assigned to the 902nd Military Intelligence Group in Falls Church, Virginia. After returning to Utah he attended Stevens-Henagar College. He worked in Salt Lake City at the airport driving for Wycoff Air freight then for Garrett trucking. On May 1977, he moved to Montpelier, Idaho and was hired at the Union Pacific Railroad as a clerk. In 1989 he became a brakeman/conductor and in 1992 he went into engine service where he remained until he retired in October 2018.

Roy enjoyed hunting, fishing, and camping. He loved the outdoors and being with his family. He also enjoyed reading, playing solitaire, and doing puzzles.

He was preceded in in death by his parents Earl and Lola, his father-in-law and mother-in-law, Glen and Margaret, his first wife Joyce, and his sister Gail.

Burial will be in the Montpelier cemetery.