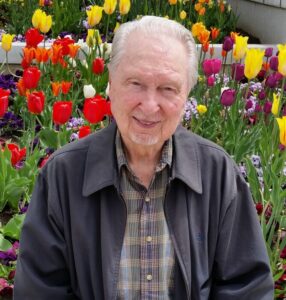 The baby boy born in Carey, Idaho, to Vermile and William Richards on March 23, 1924, was named Rollo Claude Richards.

His mother liked unique names. Rollo was a name from his mother’s side of the family and Claude was the name of his father’s brother who died early. He never met another Rollo Claude Richards during his long life.

The first years of Rollo’s life were spent working with his dad and brother Denton on their large farm in Carey; going to school; fishing and having fun. He never really did like farm work very much.

After high school he attended college in Logan, Utah. In 1943, at 19, the draft board told him he would have to leave school. He could choose to go back and work on the farm or join the armed forces. He chose the Army/Air Corps and spent the remainder of World War II training and flying in B17 and B24 bombers as a radio/gunner.

At the end of the war, he went back to Utah State Agricultural College in Logan. Here he met Maude Jeppson from Brigham City and they were married civilly on December 31, 1949. Their marriage was later sealed in the Logan Temple on October 20,1950. They graduated from Utah State in 1951.

Rollo had several career options after college but as a member of his college ROTC program he elected to enter the United States Air Force where he finished his twenty years of military service. He was a Nuclear Missile Officer and retired as a Major.

He served during three of America’s wars…World War II, Korea and Viet Nam.

Following his military career, he worked for Utah’s Department of Work Force Services until his retirement in 1984 at which time they moved to St. George, Utah. They eventually moved back to Orem, Utah, where they resided for the next twenty plus years.

Maude and Rollo are survived by their four children …. Gloria Barrus; Loni Driscoll; Rebecca Richards and Paul Richards. They also have many grandchildren and great grandchildren.

Rollo and Maude had a wonderful life together and traveled the world. He passed away at age 97, peacefully, in his bed at Covington.

Condolences may be sent to the family at www.myers-mortuary.com