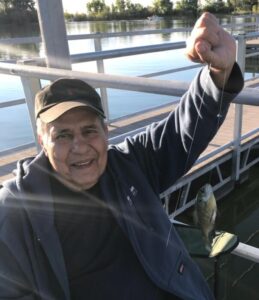 On Tuesday, December 28, 2021, Richard passed away due to complications of diabetes. It must have been a wonderful celebration to be reunited with his parents, brothers, sisters, nephew, and niece.

Richard was born in Trinidad, Colorado, to John P. and Della Juarez Gomez. The family moved to Brigham City in 1951. Richard attended Lincoln and Central Elementary Schools, Box Elder Junior High, and graduated from Box Elder High School in 1962. He was an elite athlete in many sports and was a proud member of BEHS’s Championship Football Team in 1960-61, where he was a running back. He continued his education by attending Weber State University.

While in high school, he dated his forever sweetheart, Jane Sumida. Because of Utah’s Law of not allowing interracial marriages, Richard and Jane were married in Elko, Nevada, on December 31, 1962. They would have celebrated 59 years of marriage this year. They have two children: Stephanie Anne Gomez and Richard John (Deanna) Gomez.

Richard’s passion of athletics carried thru his entire life. He was an avid Notre Dame fan, never missing football or women’s basketball games on television. His love for any sport continued when he took up golf. He and his brother, John, enjoyed their time together on the golf courses in Utah. He enjoyed watching his grandchildren grow up and was elated to watch them achieve the goals they had set for themselves.

His career began at American Food Store as a bagger and stocker. He moved to Smith’s Food King and worked his way up to become a store manager. He continued as a store manager for Safeway.

Richard had a very generous heart. He was so proud of his children and spoiled his grandchildren. They have wonderful memories of trips to Las Vegas, Richard’s favorite destination. They were the joy of his life.

Richard is survived by his wife, daughter, son, 9 grandchildren, and 2 great-grandchildren.

He is preceded in death by his parents and all his siblings: William, Robert, Lucille, Beatrice, Berniece, and John, nieces and nephews.

As per Richard’s request, he will be cremated and no formal funeral will be held. He wanted all who knew him to remember him before his body was ravaged by diabetes.

A private celebration of his life was held by family members as they shared cherished memories of their husband and best friend, father, grandfather, great-grandfather, and of days gone by.

In lieu of flowers, please consider a donation to the American Diabetes Association or St. Henry’s Catholic Church in Brigham City, Utah.