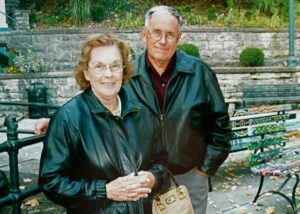 DeeAnne Perry Scott of Battlement Mesa, CO, passed away on Dec. 25, 2021, of viral complications that had interacted with long-standing health issues. DeeAnne was born to DeRalph and Eunice (Dunkley) Perry on September 22, 1940 in Las Vegas, NV. The family settled on a farm in rural Treasureton, ID. She attended high school in Preston, ID, and briefly worked as a telephone operator before entering Brigham Young University where she majored in Elementary Education and would soon meet Vernon Parkinson Scott of Rexburg, ID. Their marriage was solemnized in the Logan LDS temple in 1962.

She supported and helped her husband finish his educational goals—a science PhD. While he was advancing from teaching earth sciences in secondary schools to large universities, she taught elementary school for 3 years in Idaho Falls; 6 years in Grand Junction, CO; 6 years in Rexburg, ID; 3 years in Carrollton Georgia; and 3 years in Stillwater, OK. During these times, she bore and raised a son and 2 daughters, children that lived up to her high expectations. Due to developing health issues, she ended her teaching career in her mid-40’s, and then did volunteer work at elder-care facilities. As the children departed from home, she devoted more of her time to church service. During their marriage and retirement, the family had traveled through every U.S. state and Canada, lived in Japan for a year, and visited most of the European countries. She was a kind and gentle woman, utterly devoid of self-interest, and fully active in the LDS church throughout her life. Her final years included temple work, biographies and genealogy.

She was preceded in death by her parents and two brothers: Richard and Ed Perry.

She is survived by two brothers—Brent Perry of Preston, ID and Reed Perry of St. George, UT; also survived by her husband in Battlement Mesa, CO, and their three children—DeVern Scott of Ammon, ID; VerDean Morrison and Kanda Hill of Rifle, CO. She had 4 grandchildren and two great-grandchildren at the time of passing.

A brief memorial service is planned for the Grand Valley LDS Ward in Parachute, CO (to be announced). Her final remains will be preserved at the cemetery in Rexburg, ID.

Comments, reminisces, and condolences can be sent directly to this email address: verndeescott@gmail.com or placed on the browncremationservice.com website (Grand Junction, CO).