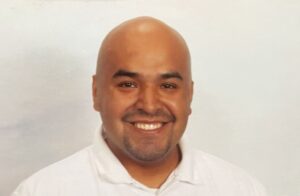 He was born on April 10, 1981 in Brigham City, Utah, the fourth and youngest son of Oswaldo Gonzalez, Jr. and Rosa Maria Brooks Gonzalez.

He worked as a production operator at Sunpro in Willard. He also worked for Sprint and Verizon as a sales consultant.

Ralph was blessed with 2 beloved daughters, Jordan and Haylee Jo. His favorite moments were in the company of his girls.

Ralph excelled at golfing and loved to cook. He was a true cat lover, was always the life of the party and a master at telling the best “dad jokes”. He was an avid fan of the Utah Jazz, the San Francisco 49ers and Elvis Presley. His favorite thing to do was to spend time with his daughters. He had a special relationship with his mother that developed after his father passed away. He was always around to take care of her and help around the house.

Ralph was preceded in death by his father: Oswaldo Gonzalez Jr.

A funeral procession from the mortuary to the cemetery is planned for Tuesday, February 9, 2021 at 2:00pm. Graveside services will follow at the Brigham City Cemetery, 300 South 300 East, Brigham City. Those wishing to attend are welcome to do so. Please wear a mask and social distance due to COVID-19.