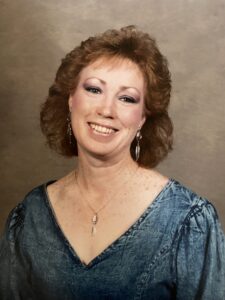 Peggy was a deeply loved sister, daughter, mother and grandmother. She passed on the morning of November 1st, 2021 in hospice care in Hyrum, Utah at the age of 70.

Peggy was born on May 28th, 1951 in Wellsville, Utah. She was the third child of eight born to Louis and Margaret Leatham. She was married to LaMar Ricks in 1970 in Wellsville, Utah and is survived by her three children: Tracie Ricks Harris (Rob), Amy Ricks Branch (Albert) and Joseph Ricks (Julia) along with her six grandchildren: Trevor Harris (Amber), Madison Harris Karbach (Scott), Wyatt Harris, Isabelle Branch, Arron Ricks and Olivia Ricks and her two great-grandchildren: Emma Harris and Lincoln Harris.

She moved to Evanston, Wyoming in 1982 and was later married to Lionel Lester in 1991 in Vancouver, Canada – they were later divorced. Peggy enjoyed traveling, reading, hot-rodding in her Pontiac Firebird and spending time with her grandchildren making crepes and doing crossword puzzles. Grandma was an avid road-tripper and spent many days on the road with her grandchildren visiting national parks while jamming out to Neil Diamond, Dr. Hook and David Allen Coe. Peggy was a free-spirited, red-headed firecracker who was never afraid of speaking her mind.

Peggy was a survivor of cervical cancer in the early 2000’s while continuously battling diabetes and the various health complications that resulted from it. Although she was a fighter, she ultimately succumbed to the ravages of diabetes.

Grandma will be deeply missed by many. A memorial service will be held in her honor for family and close friends on her birthday in the spring of 2022 at the Leatham Family plot in Wellsville, Utah overlooking the beautiful Wellsville mountains as she wished. In lieu of flowers, please help a friend or stranger in need or perform a random act of kindness.