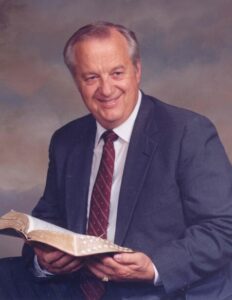 Paul Herd was a deeply devoted husband, father, grandfather and member of the Church of Jesus Christ of Latter-day Saints. He lived a life of service and devotion and positively impacted all those around him. He made friends wherever he went and was known for his generosity and wise counsel. He passed away peacefully at home, surrounded by family. He will be greatly missed by many.

Paul’s greatest joys in life were his wife of 74 years, Loretta Nereece Nilson Herd, and spending time with his children and grandchildren, especially at ‘the ranch’ up Smithfield canyon. Numerous grandchildren’s school breaks and summer vacations were spent with grandma and grandpa up the canyon. Paul went out of his way to create special experiences and memories for those around him.

He was always up for a project and was a lifetime learner, particularly about gardening, farming and church doctrine.

He was born in Weston, ID on February 26, 1931 to Weldon Christian Herd and Nellie Manilla Dawson Herd. Paul and his wife, Nereece, were childhood sweethearts and married on September 18, 1947 in Ogden, Utah, and later sealed in the Logan Temple. On their wedding day, Paul promised his bride’s parents he would take great care of her. He lived up to that promise and the two of them shared the richness of a wonderful lifetime together. Paul was determined to teach each of his grandsons how to treat a woman with respect, to be a gentleman, and to be kind.

At the time of his passing, the “Herd-herd” had grown to 163, including 71 grandchildren, 82 great-grandchildren and 3 great-great grandchildren. There are numerous honorary family members as well. He took great delight in his posterity and was never happier than when they were gathered.

The world of business came naturally to Paul as he was blessed with a keen mind. Providing well for his family was always of great importance and in contrast to his humble beginnings. He was a serial entrepreneur and created several successful businesses and had an opportunity to travel to many parts of the world. After retirement, he and Nereece served an LDS mission in Kirtland, Ohio.

Paul had numerous callings in the LDS church, including Elders Quorum President, Bishop, Stake President, temple worker and shift coordinator at the Salt Lake City Temple. He also served as a Patriarch and had the privilege of bestowing patriarchal blessings upon several of his grandchildren.

Paul is proceeded in death by his parents, his three sisters and their husbands, Dora Dee Ellis (Vern), Helen Bowen (Dale),  and Rene’ Adams (Gene), and his daughter, Cindy Herd Graves.

Interment will follow at the city cemetery in Smithfield, Utah.