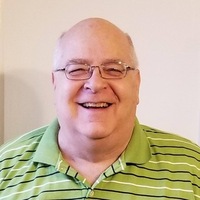 Paul Rand Greaves passed away peacefully, surrounded by family members, on Sunday, May 1, 2022, in Riverton, Utah. He was born September 18, 1945, in Preston, Idaho, the son of Paul Card and Ora Bishop Greaves. He was welcomed into the family by his doting sister Karren, grandparents, and many aunts, uncles, and cousins.

Rand attended school in Preston and graduated from Preston High School in 1963. During his high school years, he was employed as a disc jockey at radio station KPST. Early in life he developed an interest in radio, television, and electronics. For over 50 years, he maintained a ham radio operator’s license with K7LSZ as his radio designation. He was proud to own and drive an early Ford Mustang in the 1960s. His father, Paul, who worked at McCune Motor in Preston, was instrumental in helping Rand acquire one.

After high school, Rand attended Brigham Young University. He received a secondary teaching degree with a minor in English. At BYU, he met and courted his wife Penelope Lynn Garrison, an LDS convert from Wisconsin. They were married and sealed in the Idaho Falls LDS Temple on August 17, 1966. A year after their marriage, Penny became very ill with an undiagnosed disease. Later, the illness developed further and manifested itself as Hodgkin’s Disease, a form of cancer that attacks the lymphatic system. She bravely and stoically fought the disease and many other health issues caused by it for many years. She passed away at age 56 on December 12, 2002.

Soon after marriage, Rand was hired as an English teacher at Marsh Valley High School. He later was instrumental in bringing the computer and technology classes to Marsh Valley. During his tenure, he also supervised the Marshopolitan yearbook student staff. After 34 years of dutiful service, he retired from teaching in 2002. Tributes from former students and staff members remember his teaching skills, approachability, and friendly personality.

After retirement, Rand was employed as Downey’s deputy city clerk and enjoyed meeting and helping city residents with their needs and concerns. He also served on the Downey History Book Committee and edited over 700 pages of personal and family histories that were submitted for publication.

Family and friends remember Rand for his sincere generosity and interest in their welfare, his sharp wit and humor, his love and appreciation of music and singing, and his friendly neighborliness. During summer nights, he often enjoyed sitting on his porch talking with family, friends, and neighbors and marveling at the satellites, planes, and stars populating the sky. On New Year’s Eve, the family enjoyed being together and playing card games like Uno, Aggravation, and Tripoli. The family’s favorite getaway and vacation spots included Jenny Lake and Jackson Hole.

Rand was a faithful member of the Church of Jesus Christ of Latter-day Saints and served faithfully and conscientiously in numerous callings, including Sunday School teacher, bishopric counselor, ward clerk, and executive secretary. He especially enjoyed working with the youth and the Young Single Adult Branch of the Arimo Idaho Stake. Rand also devotedly looked after his aging aunt Helen Burrup and was at her hospital bedside when she passed away.

He was preceded in death by his parents, wife, Penny; son, Brent; son-in-law, Donald T. Collier; and brother-in-law, Stephen Erickson.

The family extends heartfelt gratitude to friends and medical providers who cared for Rand in recent years as his health declined. Among them: Janiece Barney, Tony Hancock, Frank and Marianne Howe, Dr. Robert M. Nash, and the staff at Oneida County Hospital and Logan Regional Hospital.

The family would like to thank everyone for the thoughts and prayers during this difficult time.

“God be with you till we meet again.”