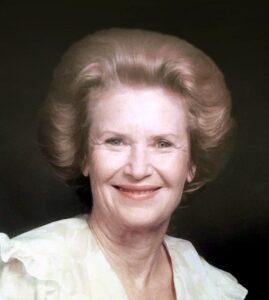 Opalgene Rawson Munns passed away peacefully on Sunday, November 7th, 2021, in her home in Waterford, California, surrounded by family. She was 96.

Opalgene was born November 16, 1924 in Preston, Idaho to James and Virginia Rawson. Her family moved to Southern California where she attended high school. It was there she met her future husband, Orlin Charles “Chuck” Munns, who had recently relocated from his home in Tremonton, Utah. They began a happy courtship with trips to the beach and mountains and dancing to the big bands at the Hollywood Palladium, but a few months later, on December 7th, the Japanese attacked Pearl Harbor and the country was at war. Chuck enlisted in the U.S. Army Air Corps. Stationed in England, he flew thirty bombing missions over Europe before returning home to Opalgene. They were married in the Salt Lake Temple on December 18, 1944. Chuck enjoyed a long and successful career as an attorney.

He and Opalgene were active members of the Church of Jesus Christ of Latter-day Saints and served in many callings. Orlin served as a bishop and stake president and he and Opalgene served as Temple President and Matron of the Oakland Temple. Opalgene was a student of the scriptures and a gospel scholar. As Temple Matron and wife of a bishop and stake president she was called upon to give talks and workshops. Her messages were inspiring and motivating and reflected her own down-to-earth practicality. As wife of a stake president, she excelled at hosting dinners and receptions and large gatherings and afterwards continued to host parties for their ward and stake. She was a talented gardener with an impressive vegetable garden and orchard, donating hundreds of pounds of fruit and vegetables to the local community.

Opalgene was dedicated to genealogy and family history. She was the family archivist and preserved the legacy of her pioneer ancestors and her own family. Orlin, her husband of 72 years, passed away in 2016. They are survived by three children: Jay C. Munns (Cheryl), Marianne Lavine (Doug), and Virginia Munns, 17 grandchildren, 32 great-grandchildren and one great-great-grandson. They were preceded in death by a daughter, Patricia Lynn Shepherd and a son, David Munns.

A funeral service will be broadcast virtually on Saturday, November 20 at 1:00 p.m. Mountain time, 12:00 p.m. Pacific time and may be viewed by clicking on the following link: https://youtu.be/D-FP-xJhpGo

Interment will be in the Whitney, Idaho cemetery.

An obituary and link to the funeral service will be provided on the Webb Mortuary website: www.webbmortuary.com.

A recording of the service will also be available thereafter at this website.

A memorial gathering will take place Memorial Day, May 30th in Preston, Idaho, details of which will be forthcoming.

Memories and condolences may also be shared with the family at webbmortuary.com.