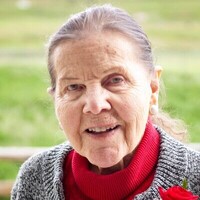 Lila Mae Johnson Crowther, age 94, peacefully passed away on February 6, 2021 of natural causes. She was staying in the home of her daughter Mildred, in Bluffdale, Utah.

Lila’s name was to be June, as that was the month she was expected to arrive. When she was born on May 22, 1926, her parents decided to name her Lila Mae. She was born in Brigham City, Utah, to Ora Mecham and Heber Kenneth Johnson. They were blessed with three beautiful daughters, Beatrice, Lila Mae, and Beverly.

The girls were raised at the Bear River Duck Club in Corrine, Utah. Lila loved sharing memories of her childhood days with her children and grandchildren. She told of driving their car onto the ferry and crossing the great Bear River to get to their home on the other side, about the millionaires who would travel there to hunt, and of their mother who cooked meals for everyone.

Lila has always had a love for music and belonged to the Orpheus Chorus in Brigham City. She graduated from Box Elder High School and Seminary in 1944. She was very active in church, serving as Sunday School Secretary, and Second Counselor in the YWMIA at the young age of 19.

Lila was employed at Peach City Ice Cream as a waitress and later worked as a bookkeeper for First Security Bank of Utah. She was selected as the Gold and Green Queen of the Brigham City 3rd Ward in the North Box Elder Stake in 1946.

Lila completed her freshman year at Utah State Agricultural College. During her sophomore year she took (quoting her words)”…what was the most important class; the one having the most far-reaching effect on my life. It was a Social Dance Class. It was here that I became better acquainted with a fine, good looking, (dark and handsome) Edward Neal Crowther.” They were married June 12, 1947 in the Salt Lake Temple.

After finishing school, they returned to Malad where Neal was employed at Crowther Bros. Milling Co. as a Feed Mixer Operator. They built their home on the corner just up the hill from his work. They enjoyed nearly 14 years of marriage and are the parents of five children; Darwin Neal, Mildred, Nolan, Bradford and Jared.

Because of complications at birth, their first son Darwin was born with emotional and mental problems and suffered with grand mal seizures. Not even we, as a family, know what sacrifices she had to make daily to help make life as comfortable as possible for Darwin. Tragedy came into their lives on March 12, 1960 with the passing of their fourth child, Bradford, to chicken pox, just a few months before his fourth birthday.

Neal had suffered greatly with headaches and following surgery to remove a brain tumor, he passed away in the Veteran’s Hospital in Salt Lake City, Utah on April 7, 1961. She continued raising their four remaining children without her loving husband. Many relatives and close neighbors always seemed to help out when needed. She taught her children how to work and to be honest and upright in all they do. Her oldest son remained with her in their home and she took care of his every need for 56 years. He had become quite a companion to her. He passed away in March of 2005.

Lila kept herself busy and belonged to a double trio singing group called “Notes for Special Interest.” They would entertain at the Senior Center, sing in stake music competitions, and for many funerals. She sang in her ward and stake choir and was able to sing in General Conference in October of 1959 with the “Singing Mothers.”  She enjoyed playing the piano and her children and grandchildren loved to sit and listen to her play. She had a wonderful way of expressing herself through music and added her own touch with lively chords she added to the melody. She was our own Victor Borge. We all enjoyed this special time with her.

Lila served on many donation drives: Pennies by The Inch, March of Dimes, serving as Oneida County Chairman for a number of years. She also volunteered for the Cancer Drive receiving her five-year Cancer Volunteer Certificate.

She worked as payroll clerk and office clerk for Crowther Bros. Milling Co. She took time to serve others as she could. Visiting teaching was very important to her and she loved to visit with the other sisters in her ward. She held many callings working in the MIA, Primary, and in her older years serving in the ward nursery. The children loved her. She was the Relief Society Chorister for Malad First Ward for many years. Lila also belonged to “The Daughters of the Utah Pioneers” where she served as Music Director. She has always had a love for her pioneer heritage and has loved reading and studying about them. She loved to attend family reunions when possible.

Lila loved working in her yard and taking long walks. She and Darwin walked at least a mile most every day. She enjoyed the scenery, fresh air and friends who visited her along the way. She loved to be active and eat healthy, but had a bit of a sweet tooth in her older years and one of her favorite treats was either a Kit-Kat or Almond Joy. She kept a little stash on hand and her grandchildren loved to sneak in her pile.

She is survived by her children: Mildred (Stephen-deceased) Anderson of Bluffdale, Utah; Nolan (Paula) Crowther of Boise, Idaho; and Jared (Ronda) Crowther of Malad City, Idaho. She has 11 beautiful grandchildren, 45 great-grandchildren, with one on the way.

Mom prioritized those things in life that mattered most. Her thoughts and actions revolved around serving and nurturing others. We never heard an unkind thing said about anyone. She created a home based on the teachings of Jesus Christ through her actions and words. She taught her children the importance of faith, prayer, compassion and love. Her testimony and prayers will always be remembered by those who heard her. We will miss her greatly, but are excited as she unites again with her husband, two sons, her parents, sisters and other loved ones.

Mom Crowther has been such an example and a beacon of light to us and others in this community. We know she will always be there watching over us.

Service may be viewed online by clicking here.

Burial will be in the Malad City Cemetery.