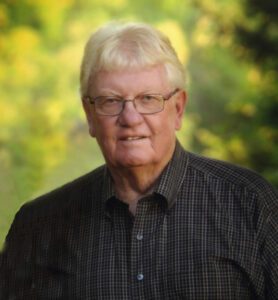 Paul graduated from high school in Cedar City, Utah.  He attended and graduated from the College of Southern Utah in 1962.  Subsequently he attended Utah State University and in the summer of 1963 he took a summer job as a tour bus driver for the Utah parks, mainly Bryce, Zion and the Grand Canyon.  During one of his many stops at the Bryce Canyon lodge, he met a young blonde girl named Linda Storrs who was working at the Lodge for her summer employment.

After some reluctance, Paul convinced Linda to go on their first date and the rest is history.  They returned to Utah State University together and yes, you can guess it, Paul married his sweetheart Linda Storrs on July 10, 1964 in the Salt Lake Temple.

Paul received his Bachelor’s Degree in Marketing from Utah State University and began his career in Business Management at JCPenney in Logan, Utah.  He spent his entire career in sales and most recently worked at Morton Thiokol, Anderson Lumber and he retired in 2006 from Stock Building Supply in Brigham City, Utah.

Paul loved the outdoors and he especially loved hunting and fishing for anything that jumped, ran, flew or swam.  In his later years he also enjoyed golfing with his family and close friends.

Paul had a passion for music.  He was well known throughout his life for his rich, bass singing voice and participated in multiple choirs, the latest being the Box Elder Symphonic Choir of which he was a member for over 20 years.

He was fiercely loyal and proud of his family.  He found great joy in attending every activity of his children and grandchildren, including but not limited to: soccer games, school concerts, programs, speaking assignments and many others.

His surviving siblings and their spouses include: Jean (John) Allred, Kent (Connie) Watson, Douglas (Nancy) Watson and Nancy Watson.  Preceded in death by his parents and his brother Collin Watson.

Special thanks to all of our wonderful neighbors and friends who have lovingly cared for Paul and his family through many years.

Those wishing to view the live stream of the services may use this link:  https://m.facebook.com/pg/mortuarymyers/videos/  and locate Paul’s live stream in the video section.

A viewing will be held from 9:00 – 10:30am at the Perry 5th Ward Church.  Funeral services will begin immediately after the viewing.