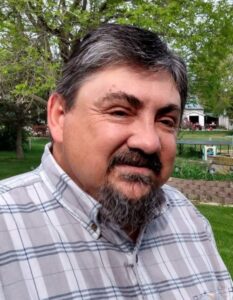 It is with great sorrow we announce the passing of Gerald Elmer Larsen, age 52, from natural causes. But there was a ballgame waiting to begin in heaven on the morning of August 1st 2021 and he could not be late. He passed peacefully at his home when the veil was drawn and he ran to the dugout into his Dad’s outstretched arms.

Gerald was born on January 26th 1968 to Bryan Thomas Larsen and Emma Jean Barrus Larsen. He was raised in Tremonton, Utah, the fifth of eight children. He was adored by his team mates who included his 3 brothers and four sisters. He attended North Park Elementary School, Bear River Junior High and Bear River High School where he graduated in 1986.

A game of baseball, basketball or football would never be turned down by Gerald. If there was a challenge from his brothers he never turned away even if the outcome was a broken nose or arm. Gerald was born with natural talents. He could throw, catch and swing a bat amazingly right or left handed. He loved to play but the game never ended until he felt that ball make contact to his bat and he could hear that smack as the ball sailed over the fence.

As a teenager Gerald worked at the Rogers and Taylor Mortuary where he learned lifelong skills. This was a memorable time for him as he formed eternal friendships with his mentors.

Gerald truly felt his greatest accomplishment through being a father. He leaves behind his beautiful, dark haired gem, Kassidie, as well as his treasured, golden haired Loralee. These girls were the lights that lit up his earthly life.

As much as Gerald adored his daughters he did not find true love until Loralee made him a grandfather. There could be no three-pointer, no homerun or no touchdown that could bring more joy and satisfaction than his little Carlos. Gerald finally found unconditional love through that baby’s love for his grandpa. He was finally at peace with what love was. Gerald spent as much time as possible with his little buddy and never took one moment for granted with him making every day the best day.

Gerald came to this earth with a huge heart and a great need to love and be loved. But he was faced with years of internal struggles. Suffering from emotional and mental illness much of his earthly time was spent trying to find peace within him. We, Gerald’s family, are grateful to all of you who showed love and encouraged him through difficult times. We pray for healing and peace to those relationships that were too broken to fix in this lifetime.

Gerald Is survived by his adoring grandson Carlos Ramirez, His loving daughters and their spouses, Kassidie and Jeremy Pierson and Loralee and Erick Ramirez, his mother, Emma Jean Barrus Larsen, His siblings and their spouses, B. Curtis and Sonia Larsen, Larry W. Larsen, Vera Jean and Stephan Thomas, LaDawn and Eli Burnham, Emily and Dennis Cutler, Michael B. and Angela Larsen, and Tricia and Daniel Nelson. He also leaves behind Jennifer Barton Larsen and her two daughters. His loving memory will be treasured by all his many nieces and nephews as well as all the Barrus and Larsen Aunts, Uncles and cousins.

Gerald is pre-deceased by his Dad Bryan Thomas Larsen, His Maternal Grandparents Winford and Orlean Barrus and his paternal grandparents Elmer and Phyllis Larsen, as well as many Aunts and Uncles.

The Family would like to give a special thanks to Gerald’s friend Heidi Mason Stokes who he loved and cared for so much and was so close to him the past few years. Thank you Heidi all you did for Gerald.

Also to our sweet Sister-In-Law Jennifer Barton Larsen and mother to our sweet Loralee, We love you! Thank you for the more than 13 years of marriage that you cared for and loved our brother. We are forever and eternally grateful for you.

The service will be live streamed and may be found at www.ruddfuneralhome.com under his obituary.