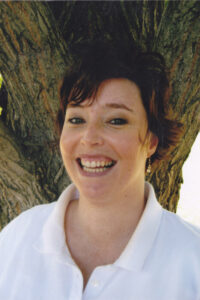 Encircled about by family in the early hours of July 30, 2021, our fun-loving, full-of-love Teri Lynn Johnstun Jones passed peacefully away in her sleep.

Born December 11, 1972 in Ogden, Utah, to Julie Wuthrich and James C. Johnstun, Teri later moved with her mother and sister to Centerville where she lived for 15 years. After graduating from Viewmont High School in 1991, she met the love of her life, Danny Jones, and the two were married on August 27, 1992. Two years later, they were sealed in the Salt Lake Temple and shortly thereafter welcomed their first daughter, Madison. Only 15 months passed before they had another baby girl, Jessica. But it wasn’t until 4 years later that their son, Joshua, arrived and completed their beautiful, loving family.

While the following years presented many ups and downs, the Jones’ displayed a unique determination to stick together and remain a family. Teri loved being a mom. She frequently told her children that she was certain she had picked each one out especially for her.

In her younger years, her favorite moments were spent on the ski slopes or playing in the mountains of Mendon with all her family. As a mother, she loved to stay up late listening to music and telling stories. She’ll forever be remembered for her highly contagious laugh that inevitably had everyone around her rolling. The highlight of Teri’s later life was the absolute joy of being a grandma to Jaxson and Paislee.

Teri had suffered from rheumatoid arthritis and lymphedema for several years. In 2018, after being wheelchair bound for 7 years, she had both legs amputated. In May of 2021, her left arm was amputated and she spent the last 3 months of her life in rehab at the Holladay Healthcare Center. While there, she worked hard in physical therapy and even began learning to walk with prosthetics. She absolutely loved the staff and they adored and took great care of her.

Teri fought a good fight and lived a harder life than most. But anyone that spent any time around her left uplifted by her positive light.

Teri is preceded in death by her mother, Julie Wuthrich Johnstun, and her father, James C. Johnstun.