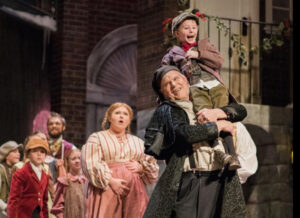 SMITHFIELD – After an 18-month hiatus due to the coronavirus outbreak, the Four Seasons Theatre company here has announced a busy scheduled of productions for the remainder of 2021.

The performing arts troupe’s fall line-up will lead off with the classic musical “Cinderella” being staged from Sept. 24 to Oct. 16.

“Cinderella” is a musical based on the familiar fairy tale that was written for a 1957 television broadcast with music by composer Richard Rodgers and lyrics by Oscar Hammerstein II.

The show was originally intended as a vehicle for Julie Andrews, who was then starring on Broadway in “My Fair Lady.” Two subsequent television recreations of the show featured Leslie Ann Warren in 1965 and Whitney Houston in 1997.

“Cinderella” has been adapted for the stage numerous times over the past six decades, including touring productions and a 2013 Broadway version with a revised script.

In November, the Four Seasons Theatre Company will team up with the Sky View High School Drama Department to perform “All Together Now,” a musical fundraiser.

The concert will feature music from recent Broadway musicals including “Ragtime,” “Waitress,” “Frozen,” “Mary Poppins” and others.

Finally, the Smithfield-based thespians will once again revive their holiday tradition of presenting “A Christmas Carol” in December.

After years of performing a stage adaptation of the Charles Dickens classic each Christmas, The Four Season troupe briefly switched to Irving Berlin’s “White Christmas” in 2017 and 2018. But their revival of “A Christmas Carol” in 2019 was warmly greeted by local audiences.

The upcoming production of “A Christmas Carol” is slated for Dec. 3 to 13.

In the New Year, the Four Season Theatre Company is also promising productions of “Mary Poppins,” “The Hunchback of Notre Dame” and “Elf, the Musical.”