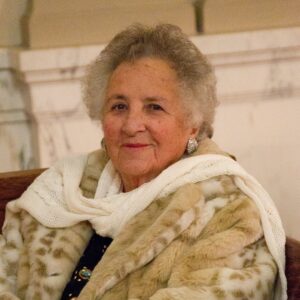 Esterina Carmela Mangano was born on October 2, 1920 in the village of San Demetrio Corone, in Calabria, Italy. She was the third daughter born to Demitri Dominic Mangano and Maria Rosa Croccia. At the age of six, Esther, her mother and two sisters joined her father in America, settling in upstate New York. She attended York Central School in Greigsville, NY, and Geneseo State Teachers College (now State University of New York at Geneseo). Esther taught first grade for nine years and loved the little ones.

Esther married Joseph DeGregorio on August 2, 1952. They moved to Longmont, Colorado and built a home in Boulder, Colorado. They were blessed with two children, Angela Marie in 1953 and David Joseph in 1956. Esther was an occasional substitute teacher at Sacred Heart of Jesus school where her children were attending, but primarily Esther was a full-time housewife and mother.  The DeGregorio family moved to Lompoc, California in March 1967. They were active in church organizations and functions, as well as square dancing with local clubs.

Esther was widowed in January 1975. She remained active at church and returned to square dancing, finding a partner/sweetheart in Larry Trauscht, with whom she danced and enjoyed social activities until his death in 2003.  Esther traveled extensively with the Lompoc Grange, visiting Europe, Hawaii, Australia and New Zealand. She enjoyed a cross-country road trip with son David, his wife Angela and grandsons Anthony and Christopher.

In 2010 Esther sold her home in Lompoc and moved in with her daughter and son-in-law Angie and Bob Messina in Santa Clarita (Valencia), California. She participated in all their social activities, including square dancing and church activities, and continued to travel with her family. She was quite the social butterfly, enjoying conversations with anyone who would greet her. She loved attending the Santa Clarita Valley Senior Center for daily exercise classes and lunches. Esther celebrated her 100th birthday in October 2020 with a Covid 19-style drive-by and outdoor pizza party. The entire family relocated to Utah in winter of 2020, David and family settling in Syracuse to be close to Esther’s grandson Chris, his wife Kassandra and great-grandson Vinny. Esther, Angie and Bob and caregiver Jennifer moved to Brigham City.

Funeral Mass is scheduled for Wednesday July 7 at 10:00am, preceded by the Rosary, at St. Henry Catholic Church, 380 S 200 E in Brigham City.

Another funeral Mass will be celebrated on Saturday, July 17 at 12:00 noon, preceded by the Rosary, at St. John Baptist de la Salle Catholic Church, 16555 Chatsworth St., Granada Hills, CA. Burial will be in Lompoc, CA, next to her beloved husband Joseph.