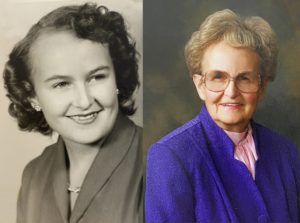 Elsie LaRue Whittle Burch, 86, of Oakley, Idaho passed away on January 1, 2021, after a nine-month lingering illness at Parke View Rehabilitation and Care in Burley, Idaho.

She was born on November 26, 1934, in Oakley, Idaho, the daughter of Eldon and Elsie Peters Whittle. In high school, LaRue played the saxophone in the marching band. She graduated from Oakley High School in May of 1953.

On September 1, 1953, she and James Clifford Burch were married in the Salt Lake City Temple of The Church of Jesus Christ of Latter-day Saints.

LaRue and James attended ISU where James majored in auto mechanics. Upon finishing his course work they moved back to Oakley and worked for LaRue’s parents in the farming and mink industries. James and LaRue were some of the pioneers of the worldwide recognized Oakley quartzite stone quarries.

James contracted polycystic kidney disease in 1968. This was the beginning of a very hard and long life for both of them. In 1973, they were forced to sell and move to Salt Lake City where they could be closer to doctors who specialized in kidney disease. When his condition improved in 1977, they moved their family back to Oakley to work full-time in their stone quarrying operation.

LaRue’s love of music continued to grow and she became a very accomplished piano and organ player. She spent most of her life being the organist and/or pianist at church. She also taught music lessons in the community. She loved to raise her own garden and fruit trees and she canned much of the produce from both. Some of her greatest loves were photography and family history.

LaRue would spend her waiting time photographing nature, animals, sunsets, clouds, rainstorms, and such during James’ dialysis after he lost his kidneys. This dialysis lasted 15 years at four-and-a-half hours a day three times a week. LaRue was very devoted to The Church of Jesus Christ of Latter-day Saints and just as equally devoted to her seven children, 20 grandchildren, and many great-grandchildren, never missing their birthdays, baptisms and other special occasions.

She was preceded in death by her parents, Eldon and Elsie Whittle; and her husband, James.

The funeral will be held at 1:00pm Saturday, January 9, 2021, at The Church of Jesus Christ of Latter-day Saints – Oakley Stake Center, located at 355 North Center Avenue, in Oakley, Idaho where friends and family will be received from 11:30am – 12:45pm prior to the service.

A live webcast of the Funeral Service will be available by clicking here.

To help mitigate the spread of COVID-19, face masks will be required and social distancing will be practiced at the viewing and funeral service.

Condolences and memories may be shared with the family at Rasmussen Funeral Home.