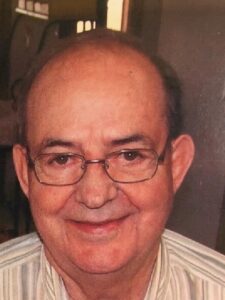 Doneal Brown Hymas, 88, passed away quietly on December 4, 2021 at The Homestead Assisted Living in Rexburg, Idaho. Doneal was born March 27, 1933 in Sharon, Idaho. His parents were Ray L. Hymas and Elizabeth Isabelle (Belle) Wallentine. He spent his childhood in Sharon, with a closely knit family of aunts, uncles, cousins and grandparents living nearby. He met Sherrill Pugmire in the Fielding High School band wherein he played saxophone and Sherry played the drums. He later married Sherry on May 22, 1952 in the Logan Temple.

Doneal moved with Sherry to Montpelier in 1953 where he began his working life by working two jobs. Soon he began working for San Francisco Chemical which later became Stauffer Chemical Company. He worked on the survey crew both in surface mining and underground mining for 5 years. He worked as underground mine engineer, foreman and manager for the next 16 years. He would travel daily 50 miles to Lief or 100 miles to Wooly Valley. Stauffer offered him early retirement at the age of 50. He then worked for the U.S. Forest Service until he officially retired.

Doneal’s upbringing in Sharon and his later life in the rural community of Montpelier fostered an abiding love for the outdoors, for hunting, fishing and farming. He enjoyed archery and at one point took a deer each of seven years in a row bowhunting. He made his own arrows, loaded his own bullets, and would look forward to ice fishing every year on Bear Lake. He enjoyed other sports as well, watching basketball, football and wrestling with wrestling being his first love. He wrestled in the 144 pound weight class in high school for two years and played football for three years.

He belonged to the Church of Jesus Christ of Latter-Day Saints and his service consisted of Ward Executive Secretary, 2nd Counselor in the Bishopric, Bishop in the Montpelier 5th Ward, and Primary Teacher. He served two missions with his wife, Sherry, with one in Durban South Africa and later in the Zimbabwe Hurari Mission as a counselor to the Mission President where he served in Zambia. When he returned to the U.S., he worked in the Logan Temple and then was called to preside over the Montpelier Assisted Living Sacrament Meetings.

After Sherry’s death he met Jamie King and married her on April 25, 2014 in the Logan Temple. Doneal loved his wives and daughters and would do anything for them. They were the light of his life. He is survived by his wife, Jamie of Rexburg, Idaho and his daughters: Sheryl (Jeanne) Gregersen of Twin Falls, Idaho; Jill Wright and her husband Eugene of Montpelier, Idaho; Chris Pope of Montpelier, Idaho; Joy Parkin and her husband Neal of Montpelier, Idaho and Teresa Widmer and Don (Woody) of Geneva, Idaho and step-daughters: Katie Mayfield and husband Eric of Idaho Falls, Idaho; Andrea Bezzant and husband Jon of Rigby, Idaho and Lyndsey Jordan and husband, William of Pocatello, Idaho. He is also survived by 20 grandchildren, 48 great-grandchildren, his sisters Colleen Ward Cooper and Karen Peterson, and his brother Terrell Hymas. He was preceded in death by his first wife, Sherrill Pugmire; mother, Elizabeth Isabelle Wallentine and father, Ray L Hymas; three brothers: Verl Hymas, Merlin Hymas and LaVaughn Hymas; two sons-in-law: William Randall Gregersen and Louis Max Pope; and two great grandchildren: Samantha Nielson and Prenton Stout.

A visitation for family and friends will be held on Friday December 10, 2021 from 6-8pm at 5th Ward Chapel in Montpelier.

Funeral services will be held on Saturday December 11, 2021 at 11:00am at the 5th Ward Chapel in Montpelier with visitation 1 hour prior to services.

The graveside service will be at the Montpelier Cemetery.

Arrangements are under the direction of Schwab Matthews Funeral Home.