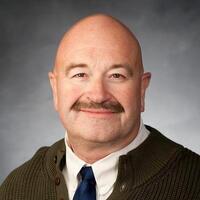 Clyne Stromberg Curtis, 61, of Rexburg, Idaho passed away peacefully on September 11, 2020 in his home, his wife Colleen was at his side.

Clyne was born to his parents, Clyne Anderson Curtis and Martha Cecelia Stromberg Curtis on August 26, 1959 in Salt Lake City, Utah. He is the eldest of six children, all who survive him.

As a boy Clyne spent his childhood living in Cokeville and Afton, Wyoming, and in various towns throughout Idaho and Montana, until his family settled in Rexburg, Idaho when Clyne was 9 years old. Just before his senior year of high school Clyne moved to Logan, Utah to help care for his grandparents, Clyne and Marie, and graduated from Logan High School with his cousins.

Clyne served a faithful two year mission for the Church of Jesus Christ assigned to Okinawa, Japan where he developed a deep affection for the language, culture, people, and food.

After his mission Clyne attended Ricks College where in 1981 he met the love of his life, Colleen Johnson through their mutual friends. Clyne and Colleen were sealed for time and all eternity in the Salt Lake City Temple on August 14, 1981.

After graduating from Rick’s College in 1984, Clyne and Colleen took their family to Utah where Clyne worked for the next 15 years in engineering firms in Salt Lake City and American Fork. In 1999 Clyne left private firms to work at Brigham Young University as their CADManager. For the next 20 years Clyne enjoyed his time as a Cougar, during which he continued to consult privately and teach as an adjunct professor for both BYU (Civil Engineering) and Utah Valley University (Construction Management). Clyne loved teaching, his work at BYU, and the many exciting projects that he was proud to be a part of.

Clyne loved to be outside, he was happiest planning and taking every opportunity to hike, drive, camp, and visit as many national parks as he could (and as often as his vehicles allowed). He passed this love of the outdoors on to his children and grandchildren. Clyne also shared this love of the outdoors with his father, and his brothers. Clyne particularly loved the adventures fishing in Alaska with his father, Clyne, his brother Wayne, and his son Zachary.

Clyne was a dedicated fan of the sport teams at BYU. He cheered them on, win or lose, day or night, rain or snow to the very end.

In 2018 Clyne suffered a stroke that resulted in taking disability leave from his position at BYU. In 2019 with increasing health issues, Clyne and Colleen along with their daughter Olivia returned to Rexburg, Idaho to be surrounded by the community and find some quiet for the remainder of his life. After suffering a second stroke in April 2020 Clyne experienced many challenges resulting in his increased decline in health.

Colleen would like to express their deepest gratitude to the Yellowstone Dialysis Center and their amazing team of nurses (Linda, Marion, LeNee, Megan, and Paul) who have been so dedicated in their care and compassion for Clyne, and constant in their support for Colleen.

Colleen would also like to thank the therapists, and hospice nurses for their support and care in the last few months.

In 2019 Clyne’s daughters Rebecca and Kathryn joined Colleen and Olivia in Rexburg to help care for their father. Their parents would like to thank them for making this change, and for their loving care and support.

The graveside service was privately held on September 17, 2020 in the Logan Cemetery where Clyne was laid to rest near his beloved grandparents and aunt who preceded him in death.