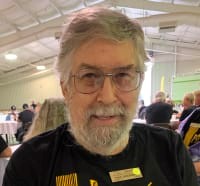 Charles “David” Shropshire, was born January 4, 1945 in Mabton, Washington to Greenville Henry and C Ruth Knight Shropshire. He was raised in Central Washington and graduated from Chelean High School. Dave entered the Air Force after graduation. After discharge he started his lifelong dream as a Truck Driver in Boise, Id before moving to Brigham City, Ut area. While in Boise, Id, Dave married the love of his life, Susan(Susie) Dishner. They had their first daughter, Suzanne, while living in Boise. After moving to Utah he worked for Champion Homes. Their second daughter, Kristy, was born in Ogden. After leaving Champion Homes, he became an owner/operator with common carrier authority. Dave primarily drove flat bed across 13 western states.

Dave’s second love of his life was working on semi’s. One of his other pleasures was spending time with the Bounders Motorhome Club. In 2017 Dave retired to spend time with his family and enjoying barbequing and smoking an assortment of food.

In lieu of flowers the family would like donations made to McKay-Dee Cancer Center in Dave’s name.

The family would like to thank Southwest Oncology, Yuma Az and McKay-Dee Cancer Center and Hospice for the care they gave Dave.