Spider encounters in Utah increase in the fall as spiders near the end of their lives and search for mates and lay egg sacks. These behaviors often occur indoors, causing more spider encounters and increasing the number of unnecessarily feared or killed spiders. While it’s true that there are spiders of concern in Utah, from an arthropod diagnostician’s viewpoint, people do not need to worry as much as they seem to. 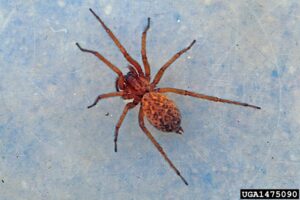 Spiders are highly beneficial to the environment and people. They are predators of insects and are also an excellent food source for those insects and wildlife that we appreciate more readily, such as praying mantises, birds and mammals. The vast majority are also unaggressive and can even be considered docile. They come in a wide array of colors and shapes, and their diversity in ecology and behavior is truly incredible. So perhaps they should be appreciated more than feared.

The three spiders we seem to fear most are hobo, black widow and brown recluse spiders. These are somewhat larger and generally have negative reputations, but it’s important to discuss their status as a health pest and parse out the things that cause fear and concern.

Hobo spiders – Hobo spiders are funnel weavers and are abundant outdoors but can also be found in homes in the fall. They have received negative attention over the years because of the documentation of their venom-causing necrotic lesions in humans. But study after study now suggests that their bites do not cause necrotic lesions. Hobo spiders are docile, do not like to bite, and will likely run away when disturbed. Due to emerging evidence, the Centers for Disease Control (CDC) has removed the hobo spider from the public health pest listing. 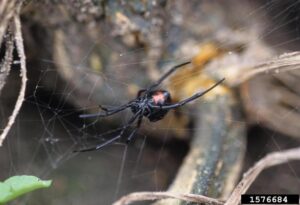 Black widow spiders – There are more than 30 species of black widows in the world, but only five are found in the United States. It can’t be disputed that their venom can pack a punch. However, it is challenging to label these spiders as “deadly,” and the odds of experiencing severe or life-threatening complications from a bite are small. These spiders are docile and are more likely to run away than bite. You are unlikely to require treatment if you do receive a bite – which is only likely if you disturb it or it is defending an egg sack.

In a review of the National Poison Data System, of 23,000 black widow spider exposures from 2000 to 2008, 65% of patients received minor health effects and required no treatment, 33.5% had a moderate impact that required treatment, and only 1.4% experienced significant effects. No deaths were reported. In addition, the report only generated information from cases where health effects were seen. Likely, countless other black widow spider bites resulted in no health effect at all, or there were cases where the receiver did know they were bitten. Black widow spiders seem to be misunderstood, are docile, and at most, you will have a bad day if you are bitten. But it is still important to use caution. They are listed as a public health consideration by the CDC for a reason. However, that does not mean we need to fear major complications or the spider itself.

It’s most common to find black widows under woodpiles, in empty flowerpots and other dark, protected structures. Be cautious when putting your hands in these areas, and you can likely avoid them altogether.

Overall, spiders in Utah carry a very low risk when you consider their abundance, presence and behavior. The only way to confirm the identity of a spider if you have been bitten is to collect the spider and have it identified by a professional identifier or entomologist. You can rarely identify spider bites based only on symptoms, especially if the bite marks are no longer visible. If you are experiencing a reaction to a bite or have symptoms that mimic a severe bite, seek medical attention.