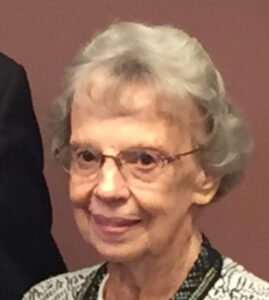 Arlene H. Balls, age 87, passed away peacefully on Thursday Aug. 12, 2021, with her husband and children gathered by her side. Arlene was born on April 30, 1934, at home in Dayton, Idaho. She was the third of four children born to Leonard and Gladys Hulet.

She attended school at West Side until her senior year and graduated from Preston High School. She participated in cheerleading and played the clarinet in the band. After graduation she married her high school sweetheart, Lloyd “Buzz” Balls on Oct. 17, 1952, in the Logan Temple.

Arlene worked for the telephone company in Preston while Buzzy served in the Army during the Korean War. She spent the last four months of Buzzy’s Army service with him in Hawaii. They made their home in Preston, Idaho where they started their family. After seventeen years of marriage, they started their own business, Buzz’s Glass and Auto Body, where they worked together building a successful business.

Arlene was an active member of the Church of Jesus Christ of Latter-Day Saints and served in leadership callings in every organization of the church including playing the piano. Arlene and Buzzy served a proselyting mission for 18 months in San Francisco, California. They also served two days a week for over ten years in the Logan Temple. Arlene spent her life in selfless service. Her favorite and most rewarding calling, however, was that of wife, mother, and grandmother.

She was preceded in death by her parents, a brother Dean Hulet, sisters Donna Buttars and Cleo Poole.

Memories and condolences can be shared at webbmortuary.com.

The family wants to express their appreciation to Dr. David Beckstead and the staff at Franklin County Medical Center with a special thanks to Judy Carter for her tender care.