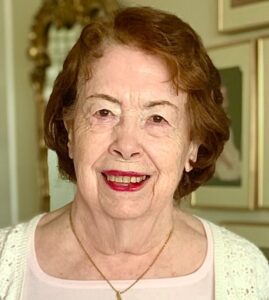 Alida was born on the outskirts of Rotterdam, Holland on September 29, 1933. She was only six years old when the Nazis invaded Holland, yet all her life she vividly remembered the first bombs falling on Rotterdam on May 14, 1940. On that day she joined her family and neighbors in the bomb shelter that her father – who held a deep mistrust of Hitler’s intentions – had built on their property. Alida was very close to her father, a building contractor whose talent and ingenuity helped them survive the privation and hunger of the five-year occupation, through the end of World War II.

Her parents had converted to the LDS (Mormon) church several years earlier, and at the end of the war the family emigrated to Brigham City, Utah, when Alida was a teenager. The adjustment was challenging, but everyone in the family worked hard and were proud to be self-sufficient in their new country.

Alida’s high school class took a tour of a local radio station one day and, enamored by the handsome young DJ, she called that evening to request a song. That call led to a date, and soon they were engaged. Alida married Weston Vernon on October 5, 1951. They had four children and were married nearly seventy years, until his death in August of 2021.

Early in their marriage, the couple lived in several states out west before settling in Silver Spring, Maryland in 1968. In 2016 they moved to Myrtle Beach, South Carolina to live out their final years in a warmer climate.

Alida’s beautiful sewing and needlework skills were seen in the decorations in her home and the gifts she made for the family, such as her exquisite christening blankets and much-cherished Christmas stockings for all of her grandchildren. She also collected Hummel figurines, and for many years was a member of the Maryland chapter of the Hummel Club. She was proud to be an American citizen, but always treasured her Dutch heritage, too.

Preceded in death by her husband, Weston (Wes) Vernon III.

She will be buried beside her husband in Logan, Utah.

A service will be held at a later date.

In lieu of flowers, the family requests that donations in Alida’s memory may be made to the American Heart Association (https://www.heart.org/?form=legacy).