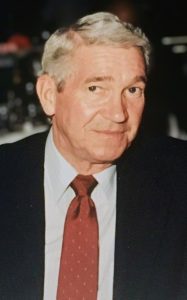 On the morning of May 28, 2022 Alfred J. Lindsay of Salt Lake City, Utah passed at the age of 91. Alfred was born in 1931 to Alfred and Cella Lindsay. He married his high school sweetheart JoAnn prior to serving in the Air Force during the Korean War. Together they raised three children Jared, Pam and Michelle.

Alfred was an electrical technician for Hercules where he got to blow things up and get paid for it! He loved his years there. He was actively involved in his community and church. He spent many years serving in the Hunter Lions Club where he spearheaded the development of Hunter Park. He was sealed to JoAnn in 1975 in the Salt Lake Temple. They loved working together on many projects including hundreds of the infamous resin grape clusters. After 35 years of marriage their time together was cut short when JoAnn passed from cancer.

After several lonely years Alfred reconnected with an old friend, Jean Tomren. They married in August 1991. Jean brought light and love back to Al’s life. They loved traveling the world together. Those trips were some of his fondest memories.

All who knew Alfred felt his gentleness, love and compassion. The world is a better place because of him. We will miss him. We are all changed for having known him. In Al’s own words “Everything will be okay”

Viewing will be held Thursday June 9th from 10-11 am at Valley View funeral home 4335 West 4100 South West Valley City, UT followed by a Graveside services at the same location around noon. Please bring lawn chairs and umbrellas for shade if you desire