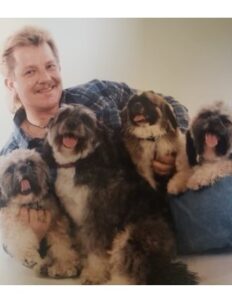 Alan Keith Abel was born to James Garnet and Verla Beth Holman Abel in Provo, Utah on March 5, 1948. He passed on the evening of November 20, 2021.

When he was 11 years old, Alan was featured in local newspapers for having saved his father’s life. The two were out near Deweyville when Garnet had a minor heart attack. Alan courageously and thoughtfully marked his path back to a nearby farm to get help, everyone was home safely by the following day.

Alan served as a missionary for The Church of Jesus Christ of Latter-day Saints in the Denmark Copenhagen Mission from March 27, 1967 to September 3, 1969. He received his mission call on his mother’s birthday, March 3, 1967. In his missionary journal, he noted the excitement of being called for a foreign mission and getting to learn a new language. Following his mission, he attended Brigham Young University for a short time.

Alan spent most of his career working as a flight attendant. Throughout his life Alan surrounded himself with dogs. Pictured with him are Cloe, Cheeto, Chelsea and Chancy. Later in life, Carley was the dog that offered him companionship.

Alan is fondly remembered by his nieces and nephews—visiting Uncle Alan and his dogs almost certainly ended in a walk to a nearby gas station for some candy. He often found joy in catching up on the lives of others. Later in life, the Branch President of a care center shared memories of Alan being sure to stop others and give them a warm hug. This is the Alan that we all hold close to our hearts.

Interment will be in the Bear River City cemetery with a memorial service to be scheduled in the summer of 2022.