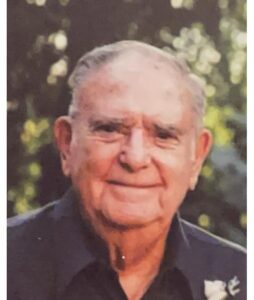 William J. Hartley III passed peacefully early Friday morning September 10th, 2021, at his home in North Logan. William J., known as ‘Bill’ or ‘Hartley’, was born November 29, 1930, to Ernestina Cabanillas and William J. Hartley II in National City, Calif. Before he graduated from San Diego High School in 1950, at the age of 17, he enlisted in the US Marine Corps Reserve. After graduation he waited for the call up to serve. His unit was called up July 31st, 1950, to begin his service in the Korean war. In the Spring of 2019, he was privileged to travel to Washington D.C. on the “Utah Honor Flight” accompanied by his guardian, Ed Black, where he was recognized and honored as a Veteran of the Korean war.

Bill retired after 31 years with the Pacific Bell Telephone Co in San Diego, initially as an actual lineman climbing telephone poles, and later as a line assigner. He met the love of his life, Gerry, as he was installing her phone service. They were married in June of 1968.

He lived in San Diego County, namely Spring Valley and El Cajon, until 1983 when he and Gerry moved to North Logan, Utah. He worked in the Cache Valley area wiring many homes for phone and cable. Bill had a good sense of humor and made many great friends as he worked in the residential construction industry. His business name was ‘Hartley Telcom’. He was always happy and willing to fix things for family and friends.

Bill loved training bird dogs and bird hunting. He raised pheasant, quail, and chucker. He loved fishing for bass and also deep-sea fishing with his Uncle Louie. He loved good restaurants and traveling with Gerry.

Cremation services are being handled by Neptune Society of Salt Lake City.

A celebration of life will be held with immediate family members.