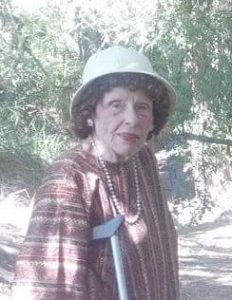 On July 7, 2022, Wanda May Hill Stone returned to her heavenly father at age 103. She was born 13 December 1918 in an old rock Pioneer house in Mendon, UT to James Leslie and Echo May Sorenson Hill. Her first card ride was when she was only a few months old, in her grandpa’s Ford Model T. this ride took her to live in a log house in Naf, ID where her family and relatives were homesteading in the desert valley of Raft River. Her family moved to Garland, UT then back to Mendon then back to Garland when she started school. At age 10 she went to Mendon to live wither grandparents Joseph N. and Mary E. Findley Sorensen. A few years later her sister Faye came to live with them. Together they did the many things necessary to run a farm. During the summer months she and her sister delivered the mail in a one-horse buggy. Her ancestors were among the early Pioneer settlers, her grandmother was the first baby born in Mendon.

She rode the train to South Cache High School where she played the cornet in the band. She attended Stevens Henegar business college and Utah State Agricultural College.

She married Alfred Stone of Newton, UT on 1 November 1939 in the Logan Temple. They owned and operated several restaurants at different times in different towns, including Al’s Green Well café in Ogden. They divorced in 1958.

She made her own clothes for 78 years on her mother’s trundle sewing machine. She was an avid reader, preferring to study and ponder the scriptures and all kinds of history. She enjoyed writing and composing poems and songs. She complied numerous journals and family histories. She loved music, singing in many choirs and choruses including the Depotaires at Defense Depot Ogden. For her own enjoyment she taught herself to play the steel guitar, the piano and the small accordion.

In her younger years she belonged to the Ogden volunteer service and other charitable organizations, finding joy in helping others. One year she fostered children, including those of Navajo decent.

Her career consisted of 17 years government service working at the Defense Depot Ogden, IRS, Adjunct Depot, Hill Air Force Base and finally Utah General Depot where she played in the band. After retiring she graduated from the LDS Institute of Religion at Weber State along-side her daughter.

She attended the Golden Hour Center for 29 years to have lunch and enjoying the activities. She sat overnight with the elderly and tended to her granddaughters.

She traveled extensively, achieving her goal to visit every State. She visited foreign countries and cruised to numerous islands to see the beauty and wonders of the world.

The light and the love of her life were her family, her church and her testimony of the gospel. She lived in 28 wards and served in 38 callings for the LDS Church. She did temple work, serving a mission in Lorin Farr Stake and served as a visiting teacher for 48 years. Most of her church service was spent teaching the gospel to boys and girls in Sunday morning Primary class, extending to those with special needs including at the branch for the deaf and blind. Her first church teaching was in the 1940’s when she taught the 8-year-old boys. She lived long enough to see them become great-great-grandparents. Her later years were spent teaching primary at the Rock Cliff 3rd Ward. She and her great-grandson Preston attended primary together for many years and in 2009 she had the joyful privilege of teaching him in her primary class.

She was preceded in death by her daughter MoLee, her parents, her sister Faye Hill and her 3 brothers, Joseph, Eugene, and Dale.

She leaves behind her daughter Shelly and son-in-law Randy Thorson, her two granddaughters and their husbands, Rachelle and Nate McManus, Heather and Jesse Grange and 4 great-grandchildren Preston, Carter, Arya and Zachary. She will live on with them in the ages of her journals which are filled with all the happy times they shared as a family.

-I love them they loved me, I helped them they helped me and that’s the way family should be-

Her last ride will take her to Mendon in her beautiful Cache Valley, where her family and relatives were settled. A graveside service will be held at the Mendon Cemetery on Wednesday, July 13th at 10:30 a.m.

She will be laid to rest next to her little daughter MoLee and near her beloved grandparents.

Her family would like to send special thanks to Cali and Annette with Ability Hospice for their help and loving care.