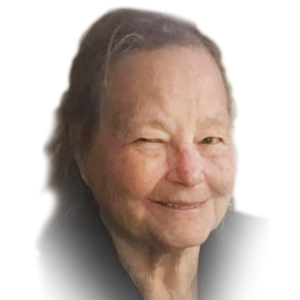 Violet was born in Shelley, Idaho and the doctor that delivered her put Samantha Jane Cox on the birth certificate. This was not the name chosen by her parents and when they took her home, from the hospital, they changed her name to Violet. Violet did not know her birth certificate was anything other than Violet until she was an adult and had to order a birth certificate to get a passport.

Violet was a one-of-a-kind mother, grandmother, and friend. Violet was born in an era of hard work and hard times. She was a very hard worker. Her and her brother Ken, would work outside on the farm while her sisters helped their mother in the household chores. Aside from all the hard work, Violet was a positive soul and always looked for the best in everyone. Her favorite flowers were carnations, roses, and lily’s. Purple was a favorite color and her most favorite hymn of all times was “Amazing Grace.” Two of her favorite scriptures were Psalms 5 and Psalms 23.

Some fun facts about Violet are:
1) Favorite Deserts – Lumpy Dick, Apple Pie, and Hot Fudge Sundaes;
2) Favorite Sports – watching football and going to rodeos to watch her grandchildren compete;
3) Leisure Activites – sewing, quilting, crocheting, embroidery, knitting, watching old movies and reading.
4) Favorite Books – Little Women and A Girl of the Limber Lost;
5) Favorite Friends – Jake Hayes, Lloyd McFarland, and Woody (Woodrow Wilson) Rawls (wife, Sophie) would come to Dick and Violet’s home in Idaho Falls most Sundays for ice cream and pie. Woody authored the children’s best seller books “Where the Red Fern Grows” and “Summer of the Monkeys.” They were all life-long friends.
6) Work History – besides working on the farm, she learned to can fish, fruits and vegetables. Later in life she became a bookkeeper for several business (Cenex, ICON and Mountain States Property Management)
7) Favorite Teacher – Mrs. Hayel. Mrs. Hayel was also Violet’s father and his sibling’s teacher.
8) Favorite Travels – She enjoyed several trips to Alaska to visit her son, Richard and taking grandchildren along for the visit. The trips consisted of salmon fishing, travelling throughout the state of Alaska. Violet loved going to Glacier Park, Yellowstone, the Redwoods in California, and Sekiu Bay for deep see fishing off the cost of Washington State. She also enjoyed traveling to visit all of her kids where they lived throughout the years.

As a young child, she lived in a very small, old white house in Shelley, Idaho on the farm. She shared a bedroom with her two (2) sisters, sharing one bed where they had to sleep sideways so that they would all fit on the bed. The house was later remodeled to better accommodate their family. For fun, as a little girl, Violet loved to swing on the branches in the trees. Also, for fun, Violet and her siblings would ride the trolley cart that transported feed and wool into the sheep barn at the old Cox homestead.

One of Violet’s fondest memories was when her family would meet up at Minor Creek for picnics and reunions with her mother’s family. They would gather together quite often, and they would play games such as baseball, horse shoes and croquet. Her family would also go boating on the snake river. In the winter months, her father would take them for toboggan rides behind the tractor or pickup. To get warm after their winter fun, her mother would sit them in front of the cook stove to warm their feet by the oven.

Violet attended Elementary and Jr. High School in Shelley, Idaho. During her Junior year of high school, she moved to Idaho Falls, to live with her grandmother, Diantha Cox. Her Senior year, she lived with her Aunt Mary until she graduated from Idaho Falls High School.

During her Junior and Senior year, Violet’s Aunt Mary worked cooking hamburgers at the Sky View Drive-In Theatre. Uncle Myron Robbins also worked at the drive-in theatre as a projectionist. Violet would sit with Myron viewing the movies while waiting for her Aunt Mary to get off work. Violet told her children that she introduced Myron to her sister Amelia. This is hearsay and later, Myron and Amelia were married into the Cox family.

Again, during Violet’s Junior and Senior year, she was active in the thespian (drama) club, which she thoroughly enjoyed. She was in the costume making department and she also played in the play “The Robe.”

After graduation, she met and married John Crook and had three (3) children: Jason, Kevin and Terri. After her divorce from John, she later met and married Richard (Dick) Arnold Peterson. They had two children: Richard and Anita.

Services are under the direction of Allen-Hall Mortuary, Logan, Utah.