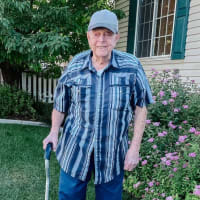 Tom was born on November 17, 1931 in Pleasantville, Indiana to Floyd and Walcie McFall. He married the love of his life, LaGaye Bowden McFall, in Ogden, Utah on December 14, 1962. They had two children together during their 57-year marriage, one son and one daughter.

Tom served our country in the Army during the Korean War and was always patriotic and proud to be an American. He was a friend to everyone he met and always had a smile, a joke, and kind words to brighten your day. Tom was a hard worker and was always willing to help. He truly would have done anything for anyone and constantly looked for ways to serve those around him. Tom volunteered for many years at the Senior Center in Brigham City, alongside his wife. He loved cars, animals, country music, spending time with his family, and socializing with his friends over coffee.

Special thanks to Collette Anderson for all of the loving care and attention that she gave to both Tom and LaGaye over the past three years.

A graveside service and Interment for both Tom and LaGaye will be held in the Brigham City Cemetery on Saturday, July 9, 2022 at 11:00 a.m. Friends and family are invited to attend.

Services under the direction of Gillies Funeral Chapel in Brigham City.

Condolences may be sent to the family at www.gfc-utah.com.