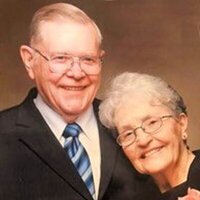 Sharyn June Olson Johnson, 89, of Ammon, Idaho, passed away peacefully surrounded by her family on December 20, 2020. She followed her husband, Kim Johnson, to heaven just five days after he left this life.

It was clear that they wanted to celebrate their 70th wedding anniversary on January 3 together – and now they will be able to. Theirs is a love story that will last for eternity.

She was born March 15, 1931, in Idaho Falls, Idaho, to Niels Orson Olson and Nina (Yeates) Olson. She was the last of their 10 children. It was a family of eight girls and two boys that had an unusually close bond of affection, faith in God, and a strong work ethic. Her father died in a tragic farm accident when Sharyn was a senior at Idaho Falls High School. She and her mother immediately went to work to support themselves, as well as Sharyn’s brother Cleon who was then serving a mission for The Church of Jesus Christ of Latter-day Saints in Sweden.

As Sharyn grew and matured, it was apparent that she had been blessed with an abundance of natural talents and abilities that she worked hard to develop. These included being a gifted dancer, artist, seamstress, cook, poet, and actress. She was an excellent student, had a keen intellect, and an interest in many academic subjects. She had a strong determination and an amazing ability to organize work to accomplish projects and goals. Although she considered many options and could have succeeded in any number of educational and professional careers, she consciously and enthusiastically chose to marry her high school sweetheart in the Idaho Falls Temple and become an outstanding wife, mother of 10 children, and homemaker.

Her positive response towards something she may not have wanted to do was always, “If you’re going to do it anyway, you might as well do it with a smile.” And she smiled every day as she took care of everyone around her.  No one left her house hungry. She made beautiful, tasty meals and her pies, jams, and preserves were to die for.

She sewed most of the beautiful dresses for her daughters’ dances. And her grandkids knew that if they had a crazy idea for a Halloween costume, their grandma could make it.

For many years she picked a bouquet of flowers from her garden every Sunday and took it to church to grace the pulpit. She would then give the flowers away to someone who she felt needed a boost that day.

Morning and evening family prayer in her home was as consistent and as regular as the rising and setting of the sun. For many years, as her children grew, she would have multiple morning family prayers each day as different groups left the house at different times for school and work.

She loved to be with family. Annual family reunions, horse-pack trips, snowmobile trips, and vacations were all precious to her and provided wonderful memories for her loved ones.

She loved her country and the freedoms it provided. She served as the Bonneville County Republican Women’s Club president for many years. And every community organization she joined was better because of her participation, including the Idaho Falls Medical Auxiliary, the Rexburg Women’s Art Guild, and local parent-teacher associations.

Among all her gifts, her greatest was the quality of charity—a Christlike, unconditional love.  Her love was not blind, but as she saw imperfections in others, she expressed greater compassion, encouragement, and commitment to them. Family, friends, and complete strangers felt and responded to her ability to include them in her circle of love.  She and her siblings received this gift in rich abundance from their mother.

Sharyn had an unfailing faith in her Savior and served in numerous callings in the church, including stake Relief Society president, ward Young Women’s president, and as a worker in the Idaho Falls Temple. She and Kim served two church service missions in Beijing, China, and Tokyo, Japan. But her most frequent and most beloved service was as the instructor of the “Laurel class” where she inspired and loved teenage girls.

A joint funeral for both Kim and Sharyn were held on Saturday, January 2, 2021, at 11:00am at the LDS Ammon East Stake Center located at 5366 East 1st Street, Ammon, Idaho. For those who cannot attend in person, the funeral will be live-streamed at lds.fybercom.net.

Condolences may be sent to the family in care of Janalee Nelson at 5130 Treyden Drive, Ammon, ID 83406.

In lieu of flowers, the family requests donations to The Church of Jesus Christ of Latter-day Saints’ Humanitarian Aid Fund

Condolences and memories may be shared with the family at Coltrin Mortuary.