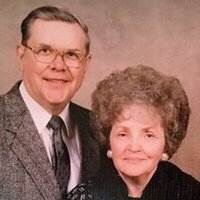 Kim Oscar Johnson, 92, of Ammon, Idaho, passed away peacefully at home surrounded by his family on December 15, 2020.

He was born September 1, 1928, in Idaho Falls to Oscar Wilhelm Johnson and Phoebe Lucina (Weaver) Johnson. He was the seventh of 12 children and always referred to himself as the “first of the second-half dozen.”

He grew up on family farms in New Sweden, Shelley, Menan, and Lincoln in Eastern Idaho where he was instilled with a strong work ethic, love of country, devotion to family, a testimony of The Church of Jesus Christ of Latter-day Saints, and abiding faith in his Savior.

After graduating from Idaho Falls High School in 1946, he served as an LDS missionary for two years in Texas and Louisiana. During those two years, he was engaged to his high school sweetheart, Sharyn June Olson. At one point during his mission, Sharyn wrote Kim a “Dear John” letter to call off their engagement. But Kim wrote back such a beautiful love letter that she decided to wait. They were sealed in the Idaho Falls Temple on January 3, 1951, and had been married just a few weeks shy of 70 years at his death. The love they share is eternal, and their personalities and talents have blended over the years to become a wonderful whole that has richly blessed everyone in the circle of their love.

Kim attended Ricks College in Rexburg, Idaho, for three years and served as junior class president. He graduated from Utah State University in Logan, Utah, with a B.S. in Bacteriology in 1953. He was finishing an M.S. in Bacteriology when he was accepted to Temple University Medical School in Philadelphia, Pennsylvania, where he graduated with an M.D. in General Medicine in 1960. He served a medical internship in Boston, Massachusetts, and a three-year residency in Norfolk, Virginia, with the U.S. Public Health Service. He moved their growing family back home to Idaho Falls where he established a family practice that lasted for 33 years. An office visit was $3 when he started in 1963 and $34 when he retired in 1996. He loved his profession and was beloved by his many patients as a real-life country doctor who made house calls. He said that the three “A’s” for success as a doctor, in order of importance, were availability, affability, and ability.

However, if you could take the boy out of the farm, you could not take the farm out of the boy. Kim enjoyed growing a huge garden every year and loved sharing its produce. He used the garden as one way to pass on to his children the habit of hard work. His sons often heard him call, “I’m growing boys, not corn, so get out here and hoe!” He said the definition of a friendless person was someone who had to buy zucchini.

He had a wonderful wit, a delightful sense of humor, and a fine bass singing voice, which he loved to use in church and family choirs. He loved to tell stories, and his kids frequently heard the latest joke he had acquired in the operating room that day. The night he attended his 50th high school reunion, he came home and said he was the only one who showed up in person—everyone else had sent their grandparents.

He was physically active all his life and enjoyed excellent health until his late 80s. For many years he belonged to the Ammon Trail Riders, a local snowmobile club. He loved owning and riding horses; going on annual family summer vacations; horse-pack camping with family and with Boy Scout troops in the mountains; and hunting with his sons, grandsons, and friends. The grandkids enjoyed water-skiing behind his boat in the summer and riding in his one-horse open sleigh in the winter.

His life was grounded in his testimony of the gospel of Jesus Christ and centered in love and service to his family, friends, and neighbors. He looked forward to planning and participating in annual family reunions to pass on his love of family heritage and traditions to his posterity.

He provided an unfailing example of devotion to his church, serving in many callings including bishop and stake patriarch. At the time of his death, he was the oldest sealer at the Idaho Falls Temple. He and Sharyn also served two church service missions in Beijing, China, and Tokyo, Japan, using his medical expertise to bless the lives of others and creating lifelong friendships along the way.

He preceded his wife in death by five days. He was preceded in death by his parents; four brothers (Walden, Lin, Merle, and Tebbin Johnson); three sisters (Beth Tew, Bonnie Jean Johnson, and Gretchen Egbert); and one son who died in infancy, Benjamin Oscar Johnson.

His funeral was held on Saturday, January 2, 2021, at 11:0am at the LDS Ammon East Stake Center located at 5366 East 1st Street, Ammon, Idaho. For those who cannot attend in person, the funeral will be live-streamed at lds.fybercom.net.

Condolences may be sent to the family in care of Janalee Nelson at 5130 Treyden Drive, Ammon, ID 83406.

In lieu of flowers, the family requests donations to The Church of Jesus Christ of Latter-day Saints’ Humanitarian Aid Fund.

Condolences and memories may be shared with the family at Coltrin Mortuary.